IRON MAIDEN RETURN IN MAY 2020 FOR ARENA SHOWS 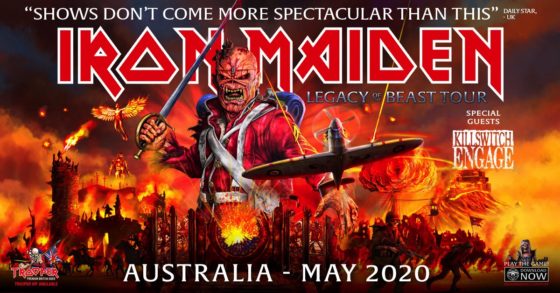 IRON MAIDEN will return to Australia in May 2020 to perform 5 massive arena shows on their Legacy of the Beast World Tour with special guests Killswitch Engage.

Tickets go on-sale on Thursday 14 November at 12noon from www.ticketek.com.au

As always there will be an exclusive pre-sale for IRON MAIDEN FAN CLUB members, go to www.ironmaiden.com for all ticketing details.


Telstra Plus member presale starts Monday 11 November at 1pm and is open until 1pm on Wednesday 13 November. Go to Telstra.com/music for further details.

The Iron Maiden Legacy of the Beast tour dates are:

The Legacy Of The Beast Tour is being hailed by fans and media as the most extravagant and visually spectacular live show of the band’s touring to date. The decades-spanning set-list of fan favourites and hits has garnered career best reviews around the world. The legacy of Iron Maiden continues to grow with some of their fastest ever selling tour tickets and sell out headline stadium, arena and festival shows across Europe and North, South and Central America. The band has visited 39 countries around the globe since the tour opened last year, playing to close to two million fans, including headlining a capacity crowd of 100,000 at the legendary Rock in Rio festival in Brazil.

President and CEO of TEG DAINTY Paul Dainty said “We can’t wait to bring Maiden back to Australia for this tour, the reviews from overseas are absolutely phenomenal. This band is hotter than ever and this pinnacle of new production is next level spectacular!”

Maiden vocalist Bruce Dickinson comments, “It’ll be four years since we were last in Australia, so we’re delighted to be making a return visit to present the Legacy Of The Beast Tour to all our fans there! We’re immensely proud of this show and we’ve had great reactions from the many fans who came to see us in Europe, North America, Mexico and South America. The production for Australia is exactly the same as the other shows on this tour so far and is based on our mobile game THE LEGACY OF THE BEAST which basically takes various incarnations of Eddie into many different Maiden Worlds. This inspired us to put together a stage show to take our fans through different Worlds and experiences set to appropriate songs. It is not that easy designing different Worlds on stage and we put a huge amount of work into this to make it work and the end result we feel is our most spectacular and certainly the most complex show to date. We’ve got all kinds of crazy things going on, including a replica Spitfire plane dominating the stage during ‘Aces High,’ tons of pyro, a giant Icarus, muskets, claymores and some truly marvellous flame-throwers which I have a hell of a lot of fun with, as you will see! And of course, we have Eddie, as you’ve never seen him before, and absolutely loads of other surprises. I’ve had the time of my life playing with all these magnificent props on stage, it’s been fantastic, we can’t wait to bring this show to you!”

Steve Harris, bassist and founder member adds, “We gave a lot of thought to the set list for this Tour as the songs needed to follow the narrative of the changing worlds of the stage show. We feel we ended up with a very strong and well balanced set mixing songs we haven’t played in many years like ‘Flight Of Icarus,’ ‘Sign Of The Cross’ and ‘The Clansman’ with songs we know the fans want to hear like ‘The Trooper,’ ‘2 Minutes To Midnight,’ ‘The Number Of The Beast,’ ‘Fear Of The Dark,’ ‘Run To The Hills,’ ‘Hallowed Be Thy Name’ and others, reflecting the journey through the different themes of the show. We’re excited to be bringing this tour to Australia as much of the set list comprises songs which our fans will know well but which haven’t been performed live there for over ten years, some of them even longer than that. The whole band is really enjoying this tour and we are really looking forward to seeing everybody again!”

The Legacy Of The Beast Tour production and set list is inspired by Maiden’s free to play mobile game of the same name which is available on iOS and Android platforms at www.ironmaiden.com/play .

Maiden’s last album The Book Of Souls reached Number 1 in an astonishing 43 countries. Iron Maiden are one of the most influential and revered rock bands of all time, and The Legacy Of The Beast Tour is their most spectacular and biggest production to date.

Joining the Legacy Of The Beast Tour is the multiple GRAMMY® Award nominated Killswitch Engage who first shook the structure of heavy music upon climbing out of snowy industrialized Western Massachusetts in 2000. A musical outlier, the band pioneered a union of thrashed-out European guitar pyrotechnics, East Coast hardcore spirit, on-stage hijinks, and enlightened lyricism that set the pace for what the turn-of-the-century deemed heavy. The group has garnered three consecutive Top 10 debuts on the Billboard Top 200, and their total streams have exceeded half-a-billion to date.

Fans in Australia will be able to purchase a special Trooper VIP package which allows them access to the exclusive pre-show function to meet with other fans, a pile of TROOPER goodies, TROOPER beers, complimentary food and the opportunity to win some great prizes.

Australia get ready, the best metal tour of 2020 is coming your way, the Legacy Of The Beast Tour lands in Perth on May 1 before traveling around Australia for 5 massive arena shows. Don’t miss it!

Do not buy from unauthorised resale scalper websites. You risk buying invalid or fraudulent tickets.

THE LEGACY OF THE BEAST TOUR

“Iron Maiden performs the best show in the history of Rock In Rio“ – Estadao, Brazil

“A total steamroller. It was one of those legendary concerts that hits you over and over without letting your guard down” – Sopitas, Mexico City

“… one of the best shows I’ve seen from Iron Maiden in the last twenty years! ” – Illinois Entertainer, Chicago, USA

“Legacy Of The Beast Tour Is The Pinnacle Of Heavy-Metal Escapism” – Rollingstone.com, New York, USA

“… an extraordinarily entertaining show filled with world-class theatrics. . .a masterclass in performance and staging”- The Times, England

“When a red-eyed horned demon from the worst part of anyone’s imagination appears, you realise this band want to raise the bar every chance they get. This is next level impressive, and top-notch nuts” – Manchester Evening News, England

“Should an award be created for the best heavy metal concert for props, pyrotechnics, and pure pantomime musical theatre, then Iron Maiden’s current audio-visual show, that batters the senses into sweet submission would demolish all contenders and pretenders alike” – Daily Express, England

“A visually stunning show, refreshing setlist and an energy beyond this world” – Aftonbladet, Sweden