JIMI HENDRIX: ELECTRIC CHURCH, a new documentary film about the music legend’s Atlanta Pop set and the circumstances surrounding it, will be released on DVD and Blu-ray on October 30th through Sony Music Entertainment Australia, Experience Hendrix L.L.C. and Legacy Recordings. The film documents the massive festival hailed then as the ‘Southern Woodstock’ and recognized now as the last great US Rock Festival. The film presents the story of how rock music’s burgeoning festival culture descended en masse to the tiny rural village of Byron, Georgia and witnessed Hendrix’s unforgettable performance.

The film details the efforts by Atlanta promoter Alex Cooley to create the definitive music festival. Cooley secured such talent as Bob Seger, BB King and the Allman Brothers, but Hendrix was the critical component he needed to elevate the three day festival to a major cultural event. ELECTRIC CHURCH features interviews with Hendrix’s Experience band mates Billy Cox and the late Mitch Mitchell as well as Paul McCartney, Steve Winwood, Rich Robinson, Kirk Hammett, Derek Trucks, Susan Tedeschi, festival organizer Alex Cooley and many others. The film contains breathtaking, color 16mm footage of Jimi Hendrix’s Independence Day appearance, a mere ten weeks before his untimely passing. Standout performances include such Hendrix classics as “Hey Joe,” “Voodoo Child (Slight Return),” “Purple Haze,” as well as confident, compelling versions of songs such as “Room Full Of Mirrors,” “Freedom,” and “Straight Ahead” that had not yet been issued by Jimi on an Experience album, but were intended to be part of the album he was working on that summer. “The Star Spangled Banner,” played against a backdrop of exploding fireworks, is another highlight, which Cooley recalls as having “knocked peoples’ socks off.

The audio release FREEDOM: JIMI HENDRIX EXPERIENCE ATLANTA POP FESTIVAL includes six performances not seen in the documentary and is set for release August 28th 2015. This will be available as a 2CD set and also as a 180-gram 2LP vinyl set.

In the sweltering Georgia heat, amongst intimidating bikers who were hired as security, hundreds of thousands of mostly young music fans descended upon the festival grounds, eventually knocking over fences and leaving the organizers with no choice but to declare it a free event. Law enforcement, not equipped to handle such crowds, adopted a hands-off policy with regards to crowd control, drug use and nudity. Against incredible odds, the event proved to be largely peaceful. By the time the Jimi Hendrix Experience took the stage on the evening of July 4, the audience swelled to more than 300,000.
     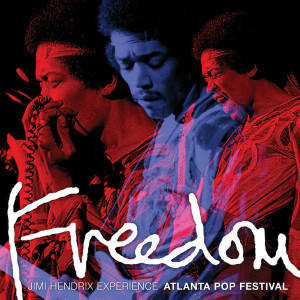 Jimi Hendrix: Electric Church DVD/Blu-ray
Contains performances of three additional songs not included in the broadcast version of the film, and other never before released Hendrix bonus content.