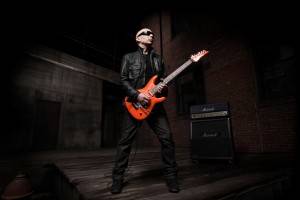 (Los Angeles, CA) Legendary performer and the hardest working guitarist in the business, Joe Satriani confirms the release of his 14th studio album, Unstoppable Momentum, on May 6, 2013 through Epic Records.  The album was recorded at Skywalker Sound in the Bay Area and was produced by Satriani and Mike Fraser (AC/DC).   The album features an amazing array of talented players including Vinnie Colauita (Sting, Jeff Beck) on drums, Chris Chaney (Janes Addiction) on bass and on keyboards, Mike Keneally (Dethklok).

After returning from the South American G3 Tour last October, Satriani got down to writing new music over the next two months.  As he recalls, “A very prolific and cathartic two months followed resulting in a bundle of new music I was very excited to get recorded!”

Eleven songs were selected to record, all “heading in different directions and touching on a variety of musical influences.”  With that in mind, Satriani decided to assemble a new studio band.  “The idea was to crank up the energy level of the sessions, and allow for more individual expression of the material from each player.  The chemistry with Mike, Chris andVinnie was fantastic and we blazed through all of the tracks with everyone laying down amazing performances.”

For two decades, Satriani has traveled the world, playing to sold-out crowds as both a headliner and as founder of the all-star “G3” guitar extravaganza.  His studio and live recordings have sold more than 10 million copies worldwide to date and of his many solo albums, two have gone platinum and four others went gold, with 15 Grammy nominations  between them.  His side project, Chickenfoot, featuring former Van Halen front man Sammy Hagar, former bassist Michael Anthony, and Red Hot Chili Peppers’ drummer Chad Smith saw their debut album certified gold and their second studio album debuted at #9. In late 2010, music sensation Nicki Minaj sampled the classic Satriani song, “Always With Me Always With You” in her song, “Right Through Me” from her multi-platinum debut album. In 2011, Satriani recreated his National Anthem performance for the Opening Day of the Oakland A’s historic 2002 season in the Brad Pitt movieMoneyball.

1.UNSTOPPABLE MOMENTUM
2.CAN’T GO BACK
3.LIES AND TRUTHS
4.THREE SHEETS TO THE WIND
5.I’LL PUT A STONE ON YOUR CAIRN
6.A DOOR INTO SUMMER
7.SHINE ON AMERICAN DREAMER
8.JUMPIN’ IN
9.JUMPIN’ OUT
10.THE WEIGHT OF THE WORLD
11.A CELEBRATION

Joe Satriani will be in Australia in April for a series of Masterclass sessions.  Dates as follow: