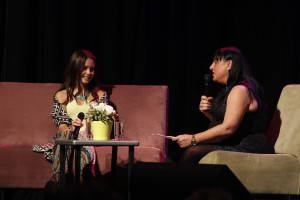 It was a night that brought out all the  members to the GC Indie Film Event to see one of the major guests of the night Jordyn Yarker  and as well as her  fans  of this amazing young 12 year old singer/ actress that had the Paradise room  full of  280 attendees at the Arts Centre Gold Coast.  The  official unveiling of the local made GC film clip AYO Rock Star that was directed by Lauren Evens and produced by the Lisa and Cameron Yarker was very well recieved by all that attended.

Filmed in the Gold Coast at the  nightclub of East and other locations in Brisbane this is catchy song  has a great energy  and buzz to the clip and was very well supported by local film industry folks.

All we can say further  is watch this space as she will be BIG Star.

Filmed by Lauren Evens Production.  Check out the night and film clip .