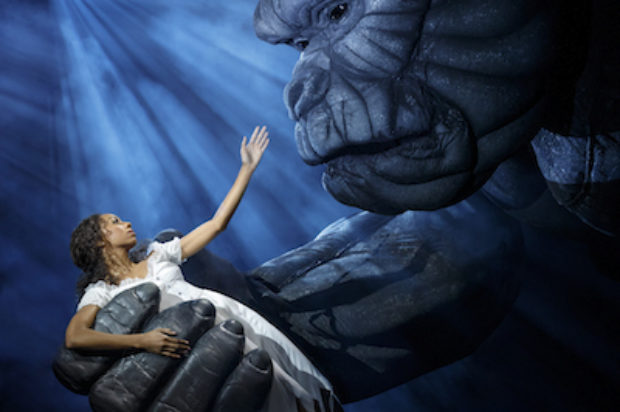 Written by Jack Thorne (Harry Potter and the Cursed Child) with a score by Marius de Vries (La La Land and Moulin Rouge) and songs by Eddie Perfect (Beetlejuice), King Kong is directed by Drew McOnie (Strictly Ballroom The Musical).

King Kong comes alive through an innovative mix of robotics, puppetry and stagecraft. Based on the 1932 novel, the stage production of King Kong is a contemporary take on the classic tale of beauty and the beast. The story follows a young actress, Ann Darrow, and a maverick filmmaker, Carl Denham, as they voyage from the bustling streets of 1930s New York to an uncharted island to capture the world’s greatest wonder. At the center of this 21st-century reimagining: a 20-foot high, 2,000-pound gorilla brought to life by a team of seamlessly integrated artists and technicians. King Kong is a larger-than-life encounter with a legend that’s always been too big to contain.

Jack Thorne (book writer) received the 2018 Tony Award and 2017 Olivier Award for Best Play for Harry Potter and the Cursed Child, and wrote the critically acclaimed Let the Right One In.

Composer and music producer Marius de Vries (the films La La Land, Moulin Rouge, and Romeo + Juliet) is a four-time Grammy nominee. Eddie Perfect (songs) is a Helpmann Award winner and composer and lyricist of the Broadway-bound Beetlejuice and Shane Warne The Musical.

Pioneering creature designer Sonny Tilders developed Kong for the show, bringing together the worlds of animatronics and puppetry to a degree never seen on stage before. Tilders was honoured with the Helpmann Award, Australia’s highest theatrical honour, for Outstanding Theatrical Achievement.

King Kong is authorized by the Merian C. Cooper Estate.

Tickets to King Kong are now on sale through Telecharge.com, by phone at 212-239-6200 and online at www.Telecharge.com.