Kingdom of the Strong Tony Cavanaugh

CRIME NOVELIST KINGDOM OF THE STRONG TONY CAVANAUGH by Caroline Russo | on July 20, 2015 | 0 comments | in Books | Like it Darian Richards is an ex-cop, a good one. He did whatever it took to solve a crime and stop the bad guy. Whatever it took! But after sixteen years as the head of Victoria’s Homicide Squad, he’d had enough of promising victims’ families he’d find the answers they needed. He had to walk away to save his sanity.

Now Police Commissioner Copeland Walsh has tracked Darian down. He needs him to help clear an old case. The death of Isobel Vine. The coroner gave an open finding. An open finding that never cleared the cloud of doubt that hovered over four young cops who were present the night Isobel died.

Twenty-five years later, one of those young cops is next in line to become police commissioner, so Copeland Walsh needs the case closed once and for all. In his mind there is only one man for the job. One man who would be completely independent. One man who has never bowed to political or police pressure. One man who knows how to get the job done – Darian Richards.

Darian is going back to stir a hornet’s nest. But once Darian is on a case he won’t back off tracking down evil, no matter who he has to take down.

Tony Cavanaugh is an Australian crime novelist, screenwriter and film and television producer. He has over thirty years’ experience in the film industry, has lectured at several prestigious universities and has been a regular guest on radio commenting on the film and television industry. His Darian Richards novels which include Promise, Dead Girl Sing and The Train Rider, have been highly praised. 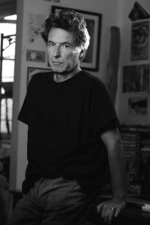