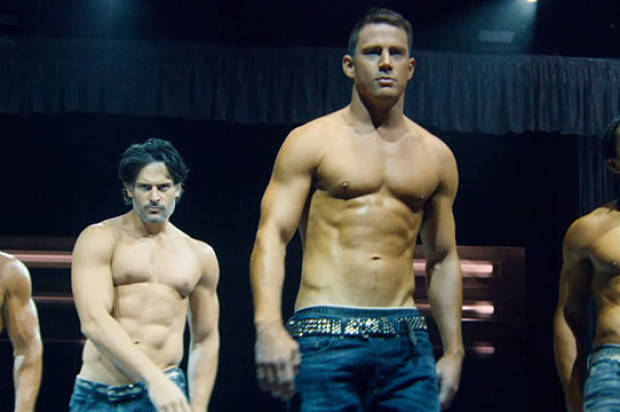 I think we can all agree that the original ‘Magic Mike’ was a far better film than it had any right to be. Less of the ‘Showgirls’-type disaster some were expecting, the “male stripper movie” emerged as one of 2012’s biggest surprises and though the announcement of a sequel came as both inevitable and unnecessary, it was a continuation I was happy to see in production.

Though original director Steven Soderbergh has stepped down from helming duties, ‘Magic Mike XXL’ still maintains the grounded, less glossy style he adopted – thanks in large part to him staying on board as both cinematographer and editor – with his assistant director Gregory Jacobs now behind the camera. If audiences were caught off guard with the previous film’s character development and (gasp!) storyline, ‘XXL’ arrives as the film many expected its predecessor to be; light on story and heavy on spectacle. To call ‘XXL’ a shallow film would be an understatement, but it’s not a criticism either as its evident the goal here was to simply have fun and feel like we’re included on this man-bonding session that sees our titular Mike (Channing Tatum) reunite with the “Kings of Tampa” for one final hurrah before they hang up the thongs and tanning oil for good.

Three years after walking away from his fruitful career as a “male entertainer” (a phrase quite often used here) Mike’s idea of the perfect life he so desperately wanted has drastically altered. Slaving away with his custom-made furniture business he’s financially struggling to afford health care for the one employee he has on staff, and his fairytale romance with Brooke (played in the original film by Cody Horn) has gone sour following a rejected proposal. It’s a life seemingly unfulfilled so a spur-of-the-moment phone call from former stage mate Tarzan (a hulking Kevin Nash) informing Mike on the planned movements of his fellow strippers comes at the most opportune of moments; the band is getting back together. Given that this is a film about male strippers, it’s quite ironic how wholesome Jacobs, Tatum (serving as one of the producers) and writer Reid Carolin have made ‘XXL’ feel; sure there’s still a healthy smattering of skin on display, and the dance sequences are relatively sexualised, but this is a far more accessible feature than one would expect.

As in the original a great deal of this film’s success lies with the likeability of its characters, and Tatum’s Mike is indeed a personality one will find easy to accompany. The actor’s aesthetic appeal is obvious, and it’s near-impossible to not praise his ability as a dancer (his impromptu routine to signature tune ‘Pony’ atop a work bench is a sight to see) but it’s ultimately his ego-free temperament that seals his appeal. His buff bevy of co-workers also benefit this time round with them each receiving their own arc as such; another advantage to a lack of plot – more character development. Big Dick Richie (Joe Manganiello), so-named for obvious reasons, is perhaps the most fleshed out next to Mike with ‘XXL’ exploring his desire to find his own identity as a performer, as well as looking for love – or at the very least someone who can handle his sizeable manhood. Ken (the impossibly handsome Matt Bomer) is looking to expand beyond his looks by branching out as a singer (the film offering the actor two sequences to showcase his silky vocals), whilst Tito (Adam Rodriguez) has aspirations of opening his own food truck alongside jovial MC Tobias (a scene-stealing Gabriel Iglesias). Unfortunately, as with the first film, Nash’s ageing Tarzan is relegated to the background, only sporadically offering up his loneliness at being in an industry where age is a particular factor.

With all these characters seemingly at a crossroads in their lives you’d be forgiven for assuming this sequel is some kind of down-trodden, self-exploration tale but you have nothing to fear as ‘XXL’ clearly wants to showcase both the fun and the joy these men bring to their profession. One thing that struck me with these men and their entertaining rituals is that they never come off as sleazy, the film opting to demonstrate how respectful these people can be to their female audiences despite the rather rigorous routines that come close to sexual simulation. Similarly, ‘XXL’ offers up a sequence featuring the group enjoying some downtime in a drag bar where they happily cavort with the crowd, playing into the gay-friendly mentality so absent from the first. The best segment though belongs to Richie’s unrehearsed strip-tease in a 711-type convenience store – to ‘I Want It That Way’ by the Backstreet Boys no less – where his goal is simply to make the sour-faced cashier crack a smile; it’s an incredibly sexy yet beautifully respectful moment that is perhaps worth the price of admission alone.

As it moves along at a delicate pace towards the stripper convention-set finale, and we are introduced to a likeable Amber Heard (as Mike’s new potential love interest), a randy Andie MacDowell (a divorcee who gives a whole new meaning to Southern hospitality) and a boisterous Jada Pinkett-Smith (as the group’s new MC who shares a torrid past with Mike, or “White Chocolate” as she knew him) along the way, ‘Magic Mike XXL’s closing performance is surprisingly underwhelming in that a much-needed group performance is sidelined for a series of individual routines that range from the barely-there (Nash’s Picasso-inspired bit is laughable) to the suitably amusing (Rodriguez’s “Candy Shop” closes on a decent whip-cream gag). Admittedly Tatum’s routine with professional dancer Stephen “tWitch” Boss, where they mirror each other’s actions, is the kind of showstopper we would expect, but when the film has been promising something bigger and badder, or in tune with the ‘XXL’ of the title, you can’t help but feel slightly disappointed at the rapid rate they fire through their individual set-pieces.

At the end of the day though ‘Magic Mike XXL’ knows the audience it wants to cater towards, and in return audiences will know if these “Kings of Tampa” are the type of royalty they wish to spend their time with. Male, female, gay, straight – whatever your identity, it’s quite possible you’ll find something contained within this breezy film to satisfy you, or in some cases motivate you as the rigs on these fellas is inspiring to say the least.