Margi Brown Ash’s To Do Double Act At Powerhouse

ACTORS AND WRITERS Margi Brown Ash's theatre in brisbane whats on in arts by Caroline Russo | on June 24, 2017 | 0 comments | in Theatre | Like it 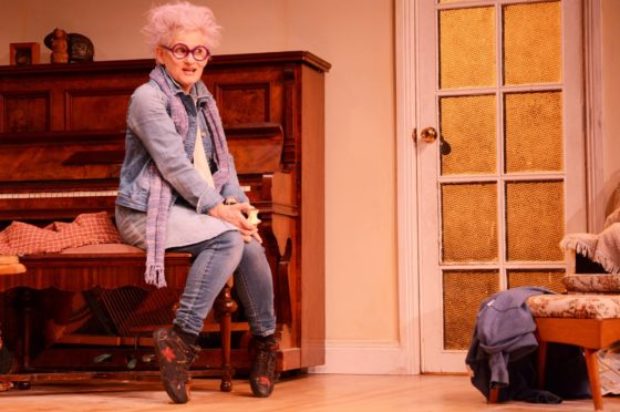 Brisbane residents will be forgiven for seeing
double in June/July when multi award-winning
playwright and actor Margi Brown Ash performs a
rare and compelling double act.

In a Brisbane first, Margi will share her
extraordinary talent with Brisbane audiences by
performing two of her shows back to back – the
acclaimed He Dreamed a Train and her awardwinning
Eve.

“It is a unique and thrilling opportunity to share
this double bill with you, two exciting stories that
complement each other, about characters who
refuse to accept the status quo,” Margi shares.
“First, in He Dreamed a Train, you will meet a
woman trying to figure out her suddenly upside-down world. Then, after intermission, you will meet Eve who finds
unique ways of living despite tremendous obstacles. Two unusual women who, had they met in the same play,
would have approved of each other’s creative strategies to construct their own sense of belonging.”
Fusing intensely poetic storytelling with multi-media, He Dreamed a Train is an intimately personal story of a family
exploring love, loss, grief and remembrance. Margi plays a fictional version of herself while her son Travis Ash
embodies a character inspired by her brother who has a degenerative neurological disease. Set in a country
Australian home, He Dreamed a Train is the heart-warming story of a woman and her sibling as they face his
premature death.

He Dreamed a Train is co-devised, directed and designed by Benjamin Knapton and written by Margi and Travis, with
several excerpts borrowed from her brother David Brown’s book of the same name. It debuted in Brisbane in 2014
to wide acclaim.

Multi award-winning Eve is co-devised and directed by Leah Mercer with Travis Ash as performer and musician.
Described by Australian Stage as “a sublime, evocative, rich, disturbing and tightly woven piece that will leave you
intellectually reeling and profoundly inspired”, Eve was inspired by the Australian writer, Eve Langley.
Part memoir, part fiction, part homage to the sacrifice of the artist, Eve is revealed as a woman at odds with her
prescribed position as wife and mother to three children who longs to be left alone to interpret the world through
her viciously beautiful prose. The real Eve Langley reacted violently to the stereotypical feminine role of the day and
rather than defining herself as a female artist, adopted the masculine persona of Oscar Wilde. A brilliant yet troubled
Australian writer, Eve Langley died in isolation just outside Katoomba, New South Wales, in 1974. Her prime writing
years were spent locked away in a mental institution. Eve brings her brilliance back into the spotlight.
Margi’s attraction to Eve Langley began 20 years ago when she was a young mother of four. Her continued
fascination with this character focuses on Eve as an artist who was ahead of her time. For Margi, Eve’s honesty
regarding her mothering was heartbreaking.

“I can relate to Eve’s story and her sense of isolation, I’m sure lots of parents will be able to relate to her struggle,”
she said.

Presented by Force of Circumstance and Nest Ensemble in partnership with Brisbane Powerhouse, He Dreamed a
Train and Eve form part of Margi’s acclaimed Belonging series. This will be the first time two of these works have
been performed concurrently. Both productions have been reworked for this season.
One of Brisbane’s most celebrated theatre makers, Margi Brown Ash has been creating/devising new theatre since
arriving in Brisbane in 1989. Many or her original works were directed and co-devised with Leah Mercer, including
three multiple award-winning shows, HOME, Joey: the Mechanical Boy and The Knowing of Mary Poppins.
This project has been assisted by the Australian Government through the Australia Council for the Arts, its arts
funding and advisory body, and proudly supported by Brisbane City Council. Generous support has also been
received from Metro Arts Theatre, Blue Room Theatre, PlayLab and Curtin University.