Twentieth Century Fox Australia is thrilled to announce that THE SECOND BEST EXOTIC MARIGOLD HOTEL is still number one at the Australian Box Office, taking $9.8 million since its release two weeks ago.

THE SECOND BEST EXOTIC MARIGOLD HOTEL was released throughout Australian cinemas on February 26 and each day has remained number one at the Box Office, beating all other films in the market proving a different fifty shades of grey is winning over Australian audiences.

The film marks a bigger box office haul than its predecessor at this same point at the Australian Box Office, proving that Australian audiences adore and cherish this story. 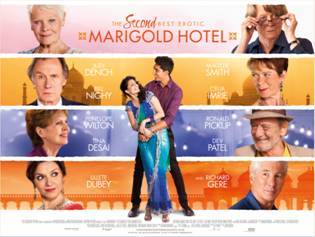 Marc Wooldridge, Twentieth Century Fox Australian Manager Director, says “After 2 weeks in release, the sequel continues to outpace the original at the Australian Box Office, which is simply remarkable given the extraordinary response to the first “Marigold” which went on to take over $21M at the box office and ranked as the #12 highest grossing movie in 2012. Cinema goers here are clearly embracing the movie in a huge way. “It’s terrific fun, hugely entertaining and, based on the success so far, “The Second Best Marigold Hotel” is more than living up to the high expectations set by the original movie”.

THE SECOND BEST EXOTIC MARIGOLD HOTEL is the expansionist dream of Sonny (Dev Patel), and it’s making more claims on his time than he has available, considering his imminent marriage to the love of his life, Sunaina (Tena Desae). Sonny has his eye on a promising property now that his first venture, The Best Exotic Marigold Hotel for the Elderly and Beautiful, has only a single remaining vacancy – posing a rooming predicament for fresh arrivals Guy (Richard Gere) and Lavinia (Tamsin Greig). Evelyn and Douglas (Judi Dench and Bill Nighy) have now joined the Jaipur workforce, and are wondering where their regular dates for Chilla pancakes will lead, while Norman and Carol (Ronald Pickup and Diana Hardcastle) are negotiating the tricky waters of an exclusive relationship, as Madge (Celia Imrie) juggles two eligible and very wealthy suitors. Perhaps the only one who may know the answers is newly installed co-manager of the hotel, Muriel (Maggie Smith), the keeper of everyone’s secrets. As the demands of a traditional Indian wedding threaten to engulf them all, an unexpected way forward presents itself.