‘ME AND EARL THE DYING GIRL’ TAKES OUT ANOTHER AUDIENCE AWARD Synopsis: Winner of the Grand Jury Prize and the Audience Award at the 2015 Sundance Film Festival, ME AND EARL AND THE DYING GIRL is a uniquely funny and moving story about Greg, a high school senior who avoids deep human relationships as a way to safely navigate the social mine field that is teenage life. In fact he describes his best friend Earl, with whom he makes short-film parodies of classic movies, as being ‘more like a co-worker’. But when Greg’s mom insists he spends time with Rachel – a girl in his class who has just been diagnosed with cancer- Greg discovers just how powerful and important true friendship can be. 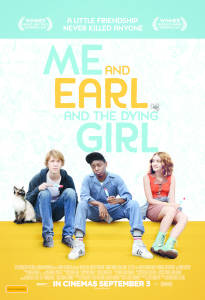