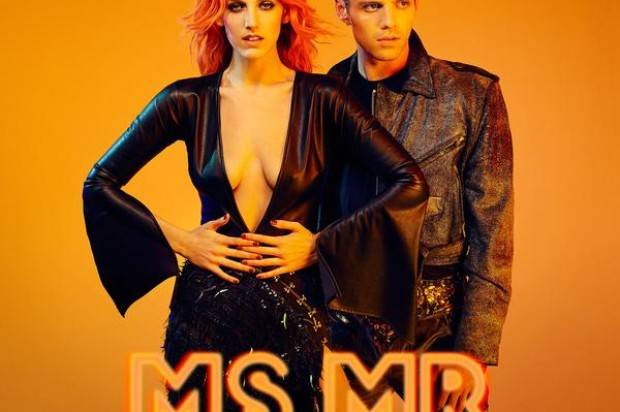 Critically acclaimed music duo MS MR (Lizzy Plapinger and Max Hershenow) have returned with ‘Painted’, the brand new single from their highly anticipated forthcoming album, set for release in July via Columbia Records and Sony Music Entertainment Australia. The track, which had its world premiere on Triple J last weekend is available to download and stream everywhere now check out ‘Painted’: http://smarturl.it/PaintedStream.

“The duo displayed a shimmery new sound that blends disco and even hip-hop flourishes, which the crowd ate up, singing along.” MS MR will also perform at this year’s Lollapalooza festivals in both Chicago and Berlin as well as Osheaga Festival in Montreal.

MS MR’s widely praised debut album, 2013’s SECONDHAND RAPTURE, spawned the Alternative radio hit AND Triple J favourite “Hurricane,” which came in at #41 in the Hottest 100 for 2012. Revered by press from The New York Times to VOGUE, Pitchfork to USA Today, the band has spent much of the last two years touring the globe, joining fellow musicians Marina And The Diamonds, Bastille, Jessie Ware and Grouplove on the road, in addition to playing major festivals including Coachella, Bonnaroo, Austin City Limits, Outside Lands, and Governors Ball. MS MR has performed on The Tonight Show, Late Show with David Letterman, and Late Night with Jimmy Fallon, while their music has been featured on countless television shows including Game of Thrones, and Pretty Little Liars.

‘Painted’ is available to purchase now.