MT. ZION 15 Double Passes give away

Thanks to Sony Pictures Hush Hush biz has 15 double passes to give away in South East Qld  at BCC Cinema for new release fim MT. ZION which opens tonight. Send you name and details to [email protected] and first in will receive a double pass. Be Quick .

Competition now closed and Congrats to all the winners. 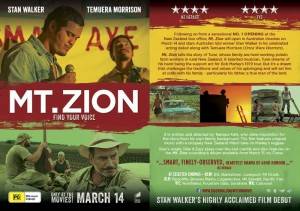 After a hugely successful no. 1 opening at the New Zealand box office, Mt Zion will open in Australia on March 14. Mt Zion is a family-oriented story starring Australian Idol winner Stan Walker in his celebrated acting debut and Temuera Morrison (Once Were Warriors) as his father. Turei’s family are hard-working potato farm workers in rural New Zealand. A talented musician, Turei dreams of his band being the support act for Bob Marley’s 1979 tour. But it’s a dream that challenges the traditions and values of his upbringing and will set him at odds with his family – particularly his father, a true man of the land. It is written and directed by Tearepa Kahi, who drew inspiration for the story from his own family background. The film features original music with a uniquely New Zealand Māori take on Marley’s reggae.