MURIELS WEDDING IS A DELIGHT AND MUST SEE MUSICAL SHOW 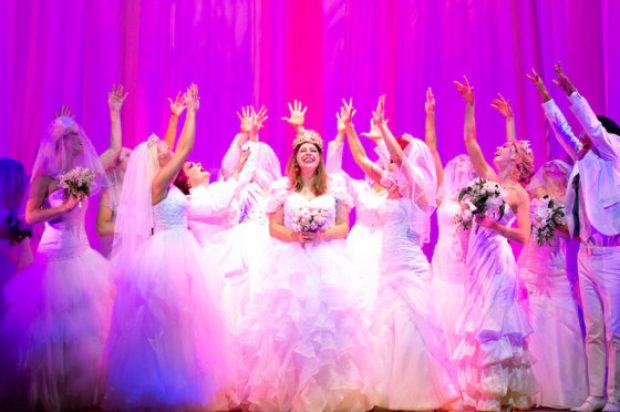 The all Australian hit, Muriel’s Wedding the Musical, sure gave the audiences a delightfull opening show at its Queensland season premiere at Queensland Performing Arts Centre’s (QPAC’s) Lyric Theatre.

This multi-award-winning musical produced by Global Creatures officially opened last night on the 21 September and had a standing ovation. Muriel’s Wedding the Musical Producer Carmen Pavlovic says the company is excited to bring this musical rendition of the iconic 1994 hit film Muriel’s Wedding to Queensland for the first time.

“The Australian cult classic movie features several Queensland locations. “Porpoise Spit” was set in Tweed Heads and the famous Goodbye Porpoise Spit scene was filmed in Coolangatta. Queenslanders are going to love seeing their State portrayed on stage complete with palm trees, surf boards, board shorts, high rises and colourful characters. Along with original music and lyrics by Queensland’s own Kate Miller-Heidke and Keir Nuttall, you could say this funny, uplifting and poignant production is debuting in its “spiritual home,” said Ms Pavlovic.

Winner of five Helpmann Awards (2018), seven Sydney Theatre Awards (2018), an Awgie Award (2018), the 2018 David Williamson Prize and an ARIA Award Nomination (2018), Muriel’s Wedding the Musical celebrated its world premiere in Sydney in November 2017. This year the show garnered two further Helpmann Award nominations: Natalie Abbott for Best Female Actor in a Musical and Pippa Grandison for Best Female Actor in a Supporting Role in a Musical.

The production closed its acclaimed return season in Sydney on 8 September 2019, following a triumphant season at Her Majesty’s Theatre in Melbourne.

Leading the cast is Natalie Abbott playing the much-loved lead role of Muriel Heslop. Natalie is a perfect fit for the lead role as is her best friend Rhonda is played by Queenslander, Stefanie Jones (Les Misérables, The Sound of Music, Dreamlover, Once the Musical) They both light up the stage with their amazing vocies and on beat performance.

The cast also includes David James (The Boy From Oz, The Sound of Music) as Bill Heslop, Pippa Grandison (Mary Poppins, We Will Rock You) as Betty Heslop, Jacob Warner (The Merchant of Venice, Romeo and Juliet) as Perry Heslop, Caleb Vines (The Wizard of Oz, How To Train Your Dragon) as Malcolm Heslop and Manon Gunderson-Briggs (Muriel’s Wedding The Musical original Sydney season) as Joanie Heslop.

I have to yell out that seeing cast member Dave Eastgate on stage in his roles, who for many years performed as a top comedian in Brisbane was just divine to watch on stage and snappy costume changes. Special highlights to watch out for that are so uplifting but my favorite one is when Murial arrives in Sydney.

Muriel’s Wedding the Musical is a theatrical version of PJ Hogan’s iconic hit film, updated to today by the writer himself with music and lyrics by Australian award winning songwriters, Queenslanders, Kate Miller-Heidke and Keir Nuttall with additional songs by Benny Andersson, Björn Ulvaeus, and Stig Anderson written for ABBA.

Muriel’s Wedding runs until 26 October 2019 in a strictly limited six-week season. Tickets are on sale at www.qpac.com.au or phone 136-246.