The video for ‘Instant Crush’, is available to view now, and the single is available to purchase from Friday August 14th. Fans who pre-order the album MALE will receive the first single as an instant grat on that date.

‘Instant Crush’ was originally recorded by the electro-pop Grammy winners Daft Punk. The song was written by the duo’s Thomas Bangalter and Guy-Manuel de Homem-Christo, along with The Strokes’ Julian Casablancas who also sang on the original track.

Of the Mad Men-esque video treatment Natalie says, “Joe Stephenson, the director is an immense talent. I fell in love with his treatment. The dark Stepford wives vibe, and his reference of Gregory Crewdson’s photography. Such beautiful colours and mood. It’s so cinematic and gives the song a whole new dimension.”

Of her unique take on the song, Imbruglia says, “On the original version, you can’t really hear what the song is about because of the effect that Julian’s voice has, which I love, by the way. However, it is such a beautiful story that I want people to hear it and connect with the words. I’m really proud of the way it turned out.”

Imbruglia finds inspiration for her new album from her favorite male artists. ‘Male’, her first album since 2009, is a collection of classic and contemporary songs all performed by men including those of Cat Stevens, Damien Rice, Tom Petty, Pete Townsend and Zac Brown Band among others. It is produced by Billy Mann, who has also worked with artists like Pink, John Legend, Celine Dion, Martina McBride, and Sting, among others.

The release of MALE will be supported by a worldwide tour starting in late 2015. Stay tuned for additional details. 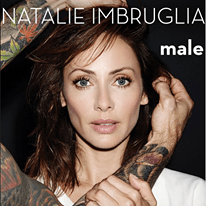 ABOUT NATALIE IMBRUGLIA
The platinum-selling Imbruglia is best known for her hit song ‘Torn’ and the accompanying video from her debut album LEFT OF THE MIDDLE (1997), which sold 7 million copies worldwide. The single hit No. 1 on multiple charts around the world, including the U.S. Billboard Top 40, and was certified platinum in the U.K. and her native Australia. ‘Torn’ still sounds fresh today as evidenced by its ongoing radio airplay and ubiquity on multiple Spotify playlists, which have generated over 30 million streams. ‘Shiver’, from her third album, COUNTING DOWN THE DAYS (2005), was also a worldwide hit and peaked at No.1 on the UK Airplay Chart for 5 non-consecutive weeks.

While ‘Torn’ brought Imbruglia international fame along with three Grammy nominations, and the 1998 MTV Video Music Award for ‘Best New Artist’, she is a woman of many talents. Her pop music success followed acting roles in Australian TV commercials and the long-running drama series Neighbours, in which she played the role of Beth Brennan. Over the last two years she has been studying acting in Los Angeles and also made her U.K. stage debut in Alan Aycbourn’s Things We Do For Love. Imbruglia is the global ambassador for Virgin Unite, the non-profit foundation for The Virgin Group and is the spokesperson for the U.N campaign to end fistula.