books Gareth Morris I hope they all managed to get a small plastic toy from the cereal box by Caroline Russo | on June 10, 2015 | 2 comments | in Books | Like it

“l hope they all manage to get a small plastic toy from the cereal box“: An insight into the Australian & British prison system. 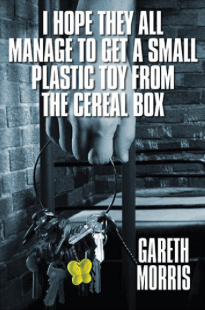 I hope they all managed to get a small plastic toy from the cereal box is based on a man who was to spend 42 years of his working life working in prisons, both in the United Kingdom and in Western Australia. During his career he was to face a prison riot, the aftermath of two subsequent prison riots, dealing with deaths in custody and having to deal with prisoners on a daily basis, some of whom had committed the most heinous crimes. He also had to deal with continual nepotism and cronyism by some elements of management that saw family and friends given employment opportunities without making any application or the positions being advertised so others would not have an opportunity to apply. Working as a Prison Officer, the author was busy with the day-to-day running of the prison and it was only as he moved up through the ranks and into an administrative role did he find that there was an ethic by some who believed in the motto: ‘Do as I tell you and not what I do.’ To question these unethical practices would have one ‘blacklisted’ and any future applications for promotion etc. would be met with failure. This book is not about the present but of past practices, although in saying that the author wonders if anyone has done anything about dealing with the nepotism and cronyism that was so openly evident. Some may criticise what the author has written but he would ask why? He believes that most below the position of management would agree in some respects and it would be the management that would be critical… and if that is the case, the saying is correct: ‘The truth can sometimes hurt.’

Gareth Morris was born in the mining village of Senghenydd in South Wales. He was the youngest of seven surviving siblings and saw the hardships of the 1950s in the mining community during that time. They talk of ‘the good old days’, but Gareth remembers that was far from the truth. Holidays or luxuries were only things you could dream of, but what the village did have was a community spirit. Gareth left school in June 1963, aged 15, and started work in a local engineering company. During his time in the engineering company Gareth was able to complete an apprenticeship as a fabricator welder. He stayed there until 1971 when he left to join the Prison Service. Joining the Prison Service was the start of a journey that saw him spend the next 42 years working in the prison environment. Although leaving school with a basic education, Gareth was to strive to learn and be as best as he could in whatever he set out to achieve. In 1981 Gareth emigrated to Australia to join the Prison Service in Western Australia. During his working experience in Western Australia Gareth was to achieve a great deal, with some of his Operational Compliance reports being submitted to the State Parliament of Western Australia. Gareth went on to achieve the distinction of being the only external person to attend the Western Australia Police Academy, successfully completing the Prosecution Officer’s course, which led him to prosecute prison-related offences in open court. He also became a member of the Prison Officers’ Appeal Tribunal that sat in the District Court. In 1997 Gareth’s wife of 26 years was to pass away due to complications as a result of breast cancer.

Gareth retired in 2013 and returned to live in Wales. Since his return he has been asked on several occasions what he had done in his working life and, when told, many suggested he write about his experiences. This book is Gareth’s first attempt at writing, and as he says, the content of this book is only a small part of 42 years in the prison environment.