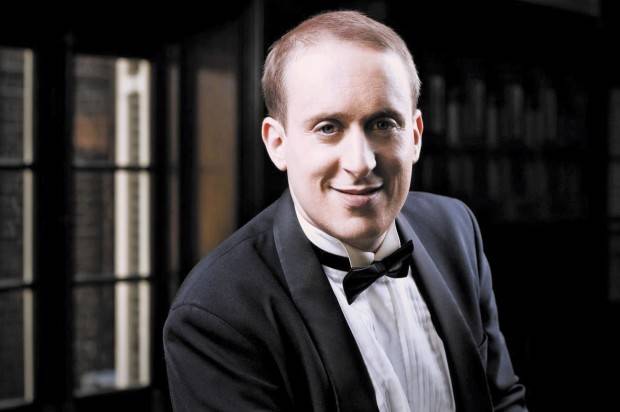 Former child prodigy and classical pianist Simon Tedeschi discusses his upcoming performance at Music By the Sea, the highlights and lowlights of his career and why performing for Nelson Mandela and the Dalai Lama was no different than a night at Penrith Panthers Leagues Club.

You are performing at Music by the Sea in June, as part of their concert series. How did that come about?
It came about because I have performed at Music by the Sea, I think twice before. I am always thrilled to perform for this series, as I admire [director] Zoli Mauritz’s capacity to think in a broad sense about his audiences.

What can people expect from your performance at Music by the Sea?
To be transported to the ‘new world’ in the early 20th century, to hear music that both accompanied and gave birth to innovation, cultural upheaval and lots of fun!

You performed at the Sydney Opera House when you were only nine. How did it feel to be something of a child prodigy?
At the time, like most kids, I was simply doing what I knew best. To be addressed as a child prodigy when still a child is confusing, that’s for sure, because it’s a very adult term for a mysterious and potent thing.

If you weren’t a musician, what would you be doing?
Some other job but still playing music. Maybe a writer or a filmmaker.

What is it about classical music that appeals to you so much?
The fact that it attempts to answer life (and death’s) biggest questions. That it is [a] 1000 years old, and still growing.

How much time do you spend rehearsing?
Depends on what I have to play. [It] can be anything from a day to a year.

You’ve performed for the likes of Nelson Mandela, the Dalai Lama and George W Bush. What was that like?
It was exactly the same as performing at Penrith Panthers [Leagues] Club, except there were more burly security men! My attitude to music and performing remains the same.

Amongst other roles, you’re the Roving Ambassador of the Australian Children’s Music Foundation. How did you get involved with that?
I got involved because I am friends with Don Spencer, who is the Chairman for ACMF (and the host of Play School during my childhood).

You’ve recorded six albums including Tender Earth and your Gershwin and Me series as well as performing live. Generally, do you prefer recording albums or performing?
They’re like chalk and cheese. Performing involves a buzz, a surge of adrenalin, the feeling of composing something that will never again be heard. It’s both mysterious and electrifying. Recording is more of a long distance marathon. It’s more head than heart, but at the same time, the absence of fear brings many great things.

Can you tell me about your shows for children?
Yes. I do a show for the Sydney Opera House called Meeting Mozart, it’s for their ‘Babies Proms’ series that has been going for decades. I also do a performance for Monkey Baa Theatre based on my own childhood (written jointly by myself and Eva di Cesare from Monkey Baa) which is for primary school-aged kids.

You write fairly regularly for various publications. Is it difficult, as a musician, to critique the music industry?
No, not at all. No industry is immune from critique, especially when one is part of it. Music, like any sphere of thought, can never stop changing and adapting.

What advice would you give to aspiring musicians?
To practice hard, don’t try to sound like anyone else, and never to take oneself too seriously. It’s not worth the bother.

What are some of the highlights and lowlights of your career so far?
Highlights: performing in front of 100,000 people at the Domain. Winning the Symphony Australia Young Performers Awards.
Lowlights: Shaking the wrong violinist’s hand when I was 12 before performing a concerto.

What’s the epitome of success for you?
To be free of any and all emotional, technical and mental encumbrances that prevent me from interpreting great music.

If you could perform with anyone in the industry, who would it be, and why?
At the moment, I have a hankering to perform with the violinist Pekka Kuusisto. He’s one of the world’s most outstanding and adventurous artists, and has not let his voice be anything other than authentic.

What’s in store for you in 2015?
I have an ABC recording coming out in September: a landmark project for me. Mussorgsky’s Pictures at an Exhibition and Tchaikovsky’s Album for the Young. In June, I’m performing the Grieg Piano Concerto with the Metropolitan Orchestra and starting late September, I will tour my Russian recording program around the country – so stay tuned!

Simon Tedeschi will play at Music by the Sea on June 6th 2015. Tickets are $35 per person and can be purchased through http://www.musicbythesea.com.au/