Groundwater, formerly Broadbeach Country Music Festival, is upholding its reputation of bringing together high calibre international and Australian country stars, with its first line-up announcement for 2018.

Broadbeach Alliance is proud to present a festival bill that includes the major award winners at the recent Golden Guitars THE McCLYMONTS, US country stars GRANGER SMITH, LILLIE MAE and JOSHUA HEDLEY, along with Aussie icon BILL CHAMBERS, multi-award winners ADAM HARVEY and O’SHEA, crowd favourites TROY KEMP and CASEY BARNES, to name a few…with still others to be announced.

Groundwater Country Music Festival is Australia’s fastest growing country music festival and is held July 27-29 across 10 performance stages in the Broadbeach precinct on the stunning Gold Coast, the sixth biggest city in Australia. Best of all…the event is completely free! The city is no longer just a beachside town, it is adding to its depth economically, socially and culturally and in April will have the eyes of the world cast on it for the Commonwealth Games. Gold Coast…it’s your time to shine. 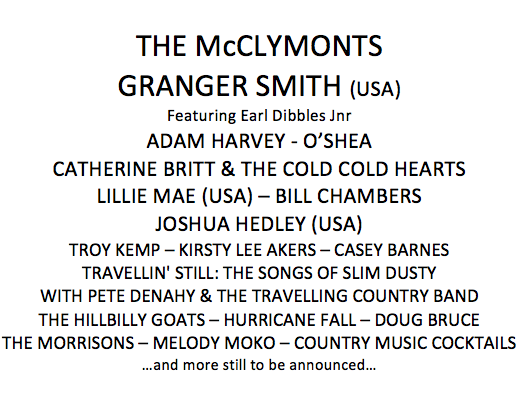 Festival Director Mark Duckworth says, “Our festival has quickly gained a reputation for bringing together a collection of artists that work together to create a genuine festival feel. This line-up combines the best of Australian talent from the mainstream to the fringes of our land whilst fusing them with the authentic sounds of Nashville and Texas.”

The festival’s recent rebranding reflects the growing popularity of the country music genre in Australia, which is exemplified by the blend of traditional and contemporary artists in this year’s diverse line-up.

Australian sister act THE McCLYMONTS are four-time nominees and twice winners of the ARIA award for Country Album of the Year. Currently at the pinnacle of their career, the sisters also scooped the pool at this year’s Golden Guitar Awards, winning three major awards including Best Group. The intensely personal storytelling within their songs has captured Australia’s hearts since their first album in 2007. Now up to their fourth studio album, with 19 top charting country singles to date, the trio will be bringing their stunning vocals back to Broadbeach yet again.

A true star born and raised in Texas in the heart of country music, GRANGER SMITH (USA) achieved a US #1 album 2013 with Dirt Road Driveway, along with his 2016 single Backroad Song reaching #1 on mainstream charts in the USA. His genuine and humble Southern roots shine through in his performance, which will tug on the heartstrings of all true country fans. Granger returns to Australia in 2018 with his alter ego Earl Dibbles Jnr, after wowing a packed out crowd at CMC Rocks last year.

Also joining the bill are two more international headliners. Hailed by Rolling Stone Magazine as one of the most anticipated touring artists of this year, JOSHUA HEDLEY (USA) brings his soaring, velvet voice and 60’s inspired songs to this year’s festival. His country music style is your grandfather’s country music, solid gold and steeped in tradition. Newcomer LILLIE MAE (USA) has been singing country and rock music on stages across America since childhood, and is one to watch – with Rolling Stone Magazine already writing about her solo debut, if you haven’t heard of her yet, you soon will!

The Groundwater 2018 line-up is rounded out by Gold Coast local and 2018 Golden Guitar finalist CASEY BARNES, who since his debut in 2012 has toured internationally, as well as performing at a host of festivals around Australia (including Tamworth Country Music Festival, The Gympie Music Muster and A Day On The Green). Groundwater Country Music Festival has fostered his talent from the beginning, and is proud to see Casey now making a monumental impression on the Australian country music scene.

“I’m so excited to be back and part of one of my favourite country music festivals on the Australian calendar,” said Casey. “Not only is it in my own home town of the Gold Coast but they were a real launch-pad for me from the start. The festival keeps on getting bigger and better every year and I can’t wait to play all the songs off my new album in July!”

Broadbeach Alliance Chief Executive Officer Jan McCormick says, “In only its sixth year, the newly named Groundwater Country Music Festival has grown exponentially, with 2017 seeing over 54,000 people descending on Broadbeach to witness some of the most celebrated Australian and international artists. 2018 is no exception and with this fabulous line up we know it will be an incredible three days.”

“Diversifying our events calendar is critical in drawing people to the Gold Coast to soak up the atmosphere of our city and our people post the Commonwealth Games,” says Gold Coast Mayor Tom Tate. “This event is synonymous with country music and is now high on the national calendar. Organisers have sensibly grown the format and allowed it to become a premiere event attracting tens of thousands of visitors. Bring on July!”

Country music is at its heart about life, passion and realism; much like the Gold Coast itself. Groundwater Country Music Festival invites you to come and rock out in the stunning Broadbeach precinct and feel the spirit of what this amazing festival represents…The perfect mix of board shorts and banjos, surf boards and steel guitars, as country music’s finest assemble for three days and nights of classic entertainment.