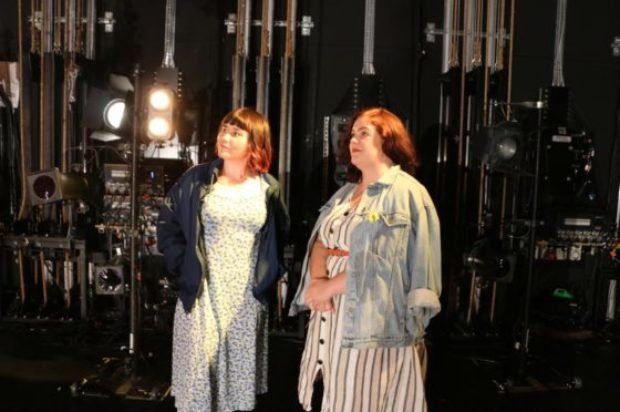 Fulbright scholar Alison Whittaker is both a law researcher and a poet. This year her poem Flora inspired NIDA Directing student Forever Tupou, herself an Indigenous artist, and NIDA Design student Keerthi Subramanyam, to set it to a dance theatre piece in the NIDA Festival of Emerging Artists.

“I’m a Gomeroi woman and grew up on the Namoi River near Gunnedah, which is Gomeroi (or commonly Kamilaroi) country in the north west of NSW,” said Alison. “It is a really dry town with periodical floods, and so all the houses sit up on stilts. it was in some ways a surreal place to grow up.

I loved growing up there and was inspired to write Flora, which is set in that town.

“I lead two professional lives, in a way I wear two hats, as a creative and a lawyer. In one life I am a poet and essayist and one as a legal researcher. I always say these two worlds are similar as they are basically nerds being litigious about the use of words and what they mean!

“When Forever approached me about this project I was so excited that my work would be adapted by another Aboriginal woman. I never thought that the medium it would go into would be dance as I am unfamiliar with that field, so it was an act of trust to pass it over to her. Forever has really honoured that trust. I love what she is doing and I am really excited to see the performance.
Forever Tupou is a dancer, choreographer and artistic director of Contemporary dance crew and aspiring dance theatre company Des Fleurs (The Flowers).

“My nan and mum are from Tasmania. Our mob is called Palawa,” said Forever. “However I grew up in Marrickville, Sydney.

“One of my friends recommended their favourite poet Alison Whittaker’s book Lemons in the Chickenwire. The poem Flora stood out to me with it’s simple four-part structure – four native flowers and four girls. The themes of first kiss, first love and no love threw me back to childhood memories. I thought I could use the soundtracks of my past to conjure up those nostalgic feelings that make you smile, but also turn your tummy inside out. The idea of adolescence became interesting, and I wanted to capture the complexity and purity of discovering who you are as a young person.”

“My first love passed away last Christmas, so I think reflecting on why that relationship was a big part of my life has made me think back on even earlier experiences of love, starting with parents and then venturing into primary and then high school. I realised friends and music were also versions of love and wanted to put that on stage.”

“The line from poem ‘Christmas lights on fire in the dirt’ was what attracted me the most. I want everyone to remember how special it was to be young, and to change the way we look back on childhood. To realise childhood was far more complex than we tend to give it credit for, and we were much more interesting than we are now.”

Keerthi Subramanyam is a set and costume designer for film and theatre. She has created a stunning set for the piece, including a handmade paper linen backdrop, natural branches of banksia bush, and vibrant costumes of street clothing the 1990s. “I was also really attracted to the line in the poem about Christmas lights on fire in the dirt, very visual image to begin with. It’s about exploring the landscape and young people in a rural setting, exploring their own identity and sexuality.

“The backdrop represents the Australian landscape as well as being an abstract container of expressions throughout the piece – to showcase the moods and emotions of the dancers and actors.
We tested it a lot to see what would work the best. I wanted it to be backlit so we needed to test how it could hold its shape as a three-dimensional shape. In the end we made it from interfacing fabric and paper which enables the light to pass through it. We then painted it and treated it with fire retardant. We’re really happy with the result.” 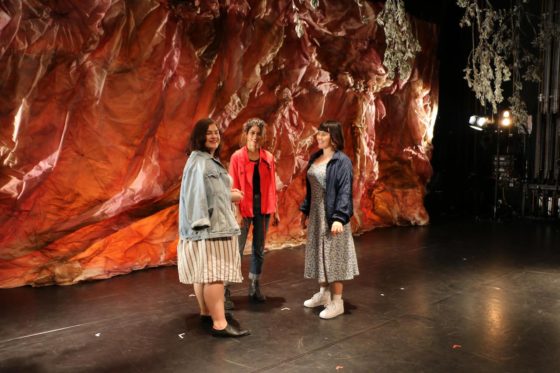 Alison Whittaker is an Australian poet and essayist. She works in media law and women’s law and policy and is Senior Researcher, Jumbunna Inst for Indigenous Education & Research at UTS.  In 2016, her poem, Many Girls White Linen, won the Judith Wright Poetry Prize. Between 2017-2018, she was a Fulbright scholar at Harvard Law School, where she was named the Dean’s Scholar in Race, Gender and Criminal Law. The poem Flora comes from Alison’s book Lemons in the Chickenwire.
Forever Tupou is a dancer, choreographer and artistic director of Contemporary dance crew and aspiring dance theatre company Des Fleurs (The Flowers). Before studying Directing at NIDA, Forever trained at Debbie Reynold’s Dance Studio as a part of their dance scholarship program in Los Angeles. Forever always had a passion for Krump and was a part of Demolition Crew based in Inglewood. Prior to LA, she was a part of Kinetic Energy Theatre, Sydney Krump Community and trained at Ev & Bow Fulltime Dance Training Centre. Upon graduating, Forever created Des Fleurs and began directing and choreographing live performances and dance films as a way to create opportunity and inspiration. Forever also studied Music Theatre at Eora College and Performing Arts at Urban Dance Centre.

Keerthi Subramanyam is a set and costume designer for film and theatre. She started photography at a very young age as a form of self-expression and developed a keen eye for the visual arts. Prior to NIDA she took a gap year where she spent her time travelling and exploring design for fashion. Keerthi has worked on theatre shows including Love and Money and Fraternal in 2017, designed for a collaborative short film called Alienated and most recently designed a music video for Blue Velvet as part of triple j Unearthed in 2019. In her final year, she attended the Venice Biennale and the Prague Quadrennial which reaffirmed her love of design and the arts.

The Festival opens on Wednesday 11 December and runs until Saturday 14 December with all shows running every night from 7-9pm across three NIDA theatres. Tickets online https://www.nida.edu.au/productions/productions/all/nida-presents/festival-of-emerging-artists