NIGHT IN A HAUNTED THEATRE

Night in a Haunted House Nourish The Children The Arts Centre Gold Coast by Caroline Russo | on October 27, 2015 | 0 comments | in Theatre | Like it 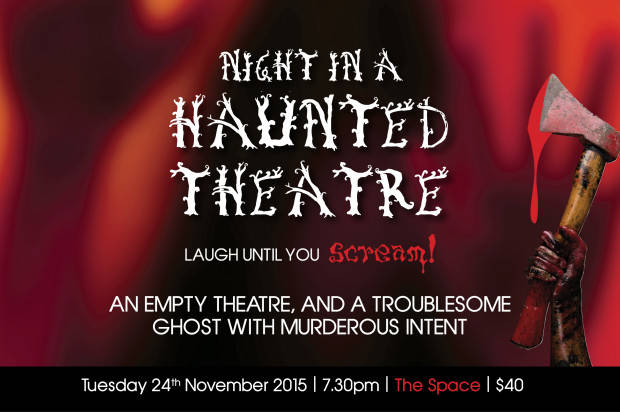 Night in a Haunted Theatre is a delightfully scary entertainment devised and performed by actor and author, Donald Macdonald, whose play Letter to Larry about the actress Vivien Leigh, has been acclaimed in Paris and London. He is also the author of the very popular and perennial Aussie comedy, Caravan, which recently did a sell- out season on the Gold Coast.

The President of the Physic Research Society enters an empty theatre which is known to be haunted. Once a year on the twenty fourth of November, the ghost of a mad monk appears, and with his appearance comes death.

The President plans to drive the ghost from the theatre. While waiting for him, our host tries telling ghost stories to entertain the audience, and hopefully, the ghost, but the ghost has no plans to leave. When he appears he is frightening and malevolent.

In an evening of laughs and chills the frightened President fights a losing battle against the wily ghost. Donald Macdonald, whose last solo show, St. John’s Gospel played in Edinburgh, London and New York, now brings his comedic talent to Night in a Haunted Theatre. We all love to laugh, and we love to be frightened. Come along and do both.

All proceeds go to ‘Nourish the Children.’