NOTHING BUT THIEVES TO RELEASE SELF-TITLED DEBUT ALBUM 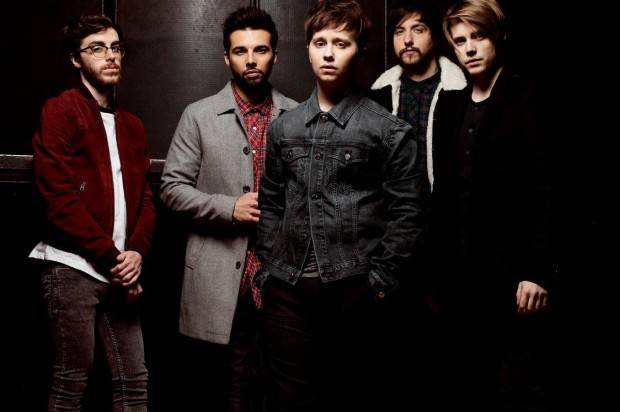 UK five-piece Nothing But Thieves will release their self-titled debut album on October 16th via RCA Victor/Sony Music Entertainment Australia, which will feature the singles ‘Trip Switch’ and ‘Itch’ as heard on Triple J.

Hailing from Southend, UK, it is fair to say that Conor Mason (vocals), Joe Langridge-Brown (guitars), Dom Craik (guitars), Philip Blake (bass) and James Price (drums) form a definitive and unique sound. At once thunderous yet delicate, raw yet methodical, they evoke the profound dynamics of music’s more creative imaginations. Drawing inspiration from the bombast of Muse, the playfulness of Kasabian and the unpredictability of Arcade Fire, the songs re-imagine the majesty of rock and roll, simultaneously kicking and comforting the listener. It’s a worthwhile adventure.

After an extended trip stateside stopping in LA, Nashville and New York to broaden their creative influences – and get out of Dom’s garage which had been their musical home for two years – the band returned to the UK in early 2014 armed with fresh ideas and a newfound impetus and belief in their sound.

Dom’s electronic “noodling”, Conor’s “old school” rocking and Joe’s forays into “Riff Central” fused to form “a weird monster,” which the band grabbed by the tail and rode. As Joe shaped lyrics from the melodies the songs dictated, the definitive Nothing But Thieves sound began to take shape and together with producer Julian Emery (Lissie) their album was born. As Joe explains:

“Many of these songs were written 2 to 3 years ago in a garage in Southend. We had a clear vision and knew what we wanted to create, so much so that we kept a lot of the takes that were recorded in the garage from the demos, which maybe isn’t the best thing in terms of sound quality, but f*ck it.

We really tried to not give ourselves any boundaries when writing the album. Collectively we hate albums that are the same song or formula repeated 11 times, it’s boring. It seems to be a bit of a trend at the moment too. Our first EP was eclectic in itself and the album is definitely a continuation of that, we’ve stretched the sound further. It’s both harder and more atmospheric. Songs like ‘Hostage’ were really nothing more than an experiment to see how electronics and Dance structures changed how we sound as a band. ‘Drawing Pins’ and ‘Ban All The Music’ is purely the sound we make when the 5 of us get in a room.”

After a UK tour with Twin Atlantic late last year, the band entered 2015 as one of the UK’s most exciting new bands and buoyed by 2015 tips from iTunes, Spotify and XFM amongst others, followed by a European tour supporting AWOL Nation. Unrelenting, the band then embarked on a UK tour with Darlia and gave a stand-out live performance at one of this year’s NME Awards shows.

It was not long before the world took notice with playlist additions from Triple J and Alt Nation Sirius XM in the US, as well as spot play from legendary US radio station’s KCRW & KROQ. The band was added to a multitude of international festivals including Reading and Leeds and was the main support slot at Muse’s ‘Rock In Rome’ show in July.

Recorded between Angelic Studios, Little Drummer Boy and Hits & Arts Studios and mixed by Cenzo Townshend (Maccabees,U2, Florence & The Machine, Thirty Seconds To Mars) and Adam Noble ((Placebo, Don Broco, Kids In Glass Houses), the album will undoubtedly take the band to the next level. They’ve always had the songs, now they have the platform.