Never Been Better olly murs Sony Music Australia tour by Caroline Russo | on August 3, 2015 | 0 comments | in Concerts | Like it UK superstar Olly Murs lands on our shores today to begin the Australian leg of his critically acclaimed Never Been Better Tour, presented by Nine Live and Sony Music Entertainment Australia. Olly Murs’ new single ‘Never Been Better’, lifted off his album of the same name, is at Australian radio now ahead of the video which is set to premiere in the coming weeks.

Olly is also the co-host of The X Factor UK for 2015 alongside Caroline Flack, with judges Simon Cowell, Rita Ora, Nick Grimshaw and Cheryl Fernandez-Versini.

The Never Been Better Tour made its way across the UK and Europe earlier this year, where Olly performed to sell out crowds in multiple cities including numerous dates at London’s O2 Arena.

“The all round entertainer with great pop songs, top drawer vocals and a cheeky grin to go with every performance. It’s hard not to like him…. I think most of the crowd will agree they have Never Been Better after seeing Olly Murs live!”
– Evening Times, Glasgow, Scotland

“First class banter, good looks, a fine repertoire and a great voice- what more could you want from a pop star?”
 – Chronicle Live, Newcastle, England

“ At the heart of last night’s show was a talented vocalist who co-writes his own songs, performs with a live band and isn’t afraid to push  his audience.”
– Belfast Telegraph, Belfast, Ireland

With three multi-platinum albums, four number one singles and numerous sold out arena tours under his belt in the UK and Europe, Olly Murs has also had a huge presence in Australia throughout his career, including an East Coast tour in 2013 and his most recent promotional visit in October last year. Olly Murs’ 2012 ARIA Gold certified album RIGHT PLACE RIGHT TIME features the Double Platinum ARIA Top 5 hit ‘Dear Darlin’, as well as the ARIA Top 5, number one Airplay and 4 x Platinum certified single, ‘Troublemaker’ feat. Flo Rida. 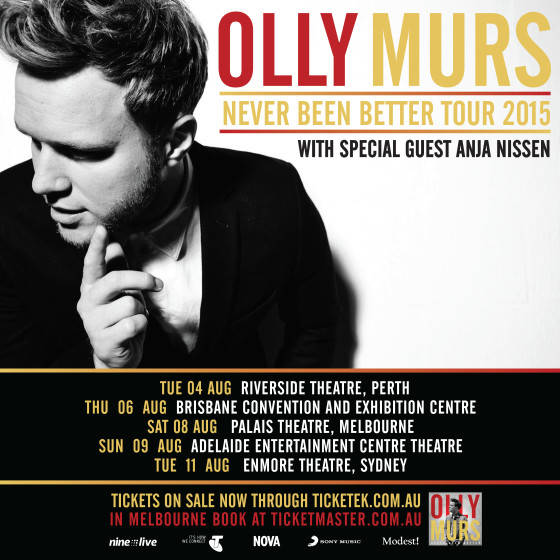