Alan Menken and Howard Ashman’s 1982 comic shock-horror musical tribute to sci-fi and B movies draws more longbows than you would find in Robin Hood’s Sherwood Forest.

There’s death and mayhem aplenty, as well as sadistic violence, but that doesn’t stop the laughter revolving around the world since it opened off-off Broadway a lifetime ago.

I’ve seen the musical comedy so many times, in nearly four decades of reviewing, that I went to the Gold Coast Little Theatre feeling a little jaded to say the least.

But despite my misgivings, director Brady Watkin’s offering proved to be an engaging and delightful night at the theatre thanks to a stellar high octane cast and a strong horticultural presentence in the shape of Aubrey II.

The show – inspired by low-budget Hollywood director Roger Corman’s 1960 movie and myths, legends and stories of man eating plants going back to the 1800s – has a sub text warning of the threat of galloping consumerism.

The story opens in a Skid Row florist where shop owner Mr Mushnik (Johnathon Fife) is on the brink of telling overtly dishy assistant Audrey (Harmony Breen) and downtrodden shop boy Seymour (Ethan Liboiron) that he’s going to be forced to close for good. 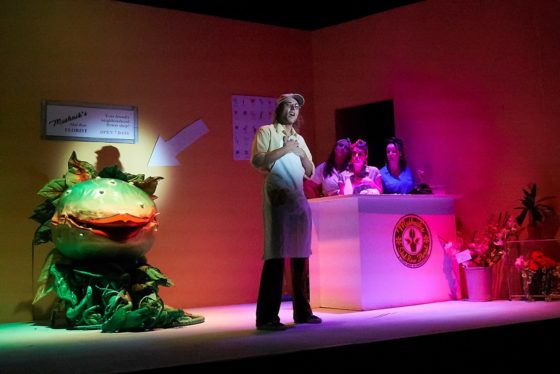 To forecast the story and emphasis the state of his business – and utter hopelessness of the neighbourhood – the show opens with three street urchins, Crystal (Kristine Dennis), Chiffon (Ruby Hunter) and Ronette (Lucy Koschell) singing Little Shop of Horrors and then, with the Company, Skid Row (Downtown).

Then Seymour turns up with a melon-sized Venus fly trap type plant and a cock and bull story of its origins that hints of Chinese mysticism, which gives the plant a romantic veneer.

The plant – which has been described as an anthropomorphic cross between a venus fly trap and an avocado but looked to me like a giant gooseberry (I only occasionally watch Gardening Australia) – begins to develop ‘living’ traits.

That’s emphasised when Seymour – who is secretly in love with the blousy Audrey who lives in terror of her violent dentist-cum-leader-of-the-pack boyfriend Ordin (Clay English) – christens the plant Audrey II.

As the plot develops Seymour, and the audience, discover that Audrey II has a taste for blood and guts and even acquires a voice which demands that he ‘feeds me.’

The show quickly morphs into a man eating plant’s gourmet delight although on the upside, Seymour’s material fortunes improve, along with the shop’s success and, as a bonus, he comes closer to winning the girl. 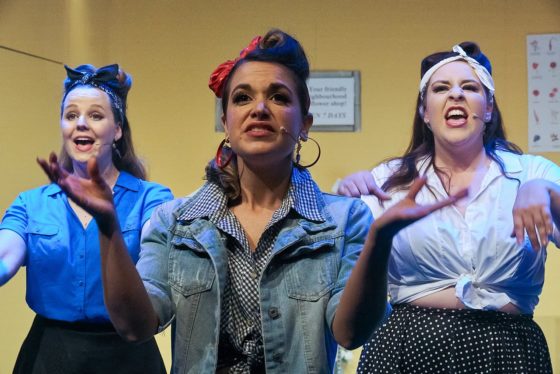 However, in true Faustian tradition everything comes at a price and eventually Seymour has to face the true light of day and the fact that Audrey II has an agenda.
There’s certainly factors which makes Little Horror productions work and director Brady, and her cast and crew, have ticked most of the boxes.

The puppet – although lacking mobility – has to be a powerful, almost overbearing, presence which ‘it’ (a female name but a deeper masculine voice) is thanks to a combination of three major talents.

The puppets are pivotal to the show but there’s a valued added features in rollicking well sung doo-wop performances from the energised cast, a terrific band, under the direction of Ben Murray, and a full-on bullet train approach to the show’s pace.

This Little Shop production is a treat to both the ears and the eyes and pays justice to maxim that good shows, well presented, will last the distance.