On Centre Stage :Noises Off Review

brisbane playhouse Comedy Michael Frayn. Noises Off simon burke steven tandy by Caroline Russo | on June 14, 2017 | 0 comments | in On Centre Stage | Like it Michael Frayn’s 1982 theatrical farce is now widely regarded as a classic behind-the-scenes fly-on-the- wall glimpse at a potpourri cast of flawed characters battling to stage a play in the UK.

The praise heaped on it has run a vast gamut from funniest play every written to charming, endearing and eminently loveable.
So it should come as no surprise that it pops up somewhere – either professionally or in the community domain – every few years.
This time around it’s a joint Queensland and Melbourne Theatre Company production boasting a superb cast of top flight Australian actors.
One of the things I love about Noises Off is, that while it seldom fails to produce a laugh-a-minute, it seems to fade from the mind over time leaving a new production feeling fresh and as yet undiscovered. 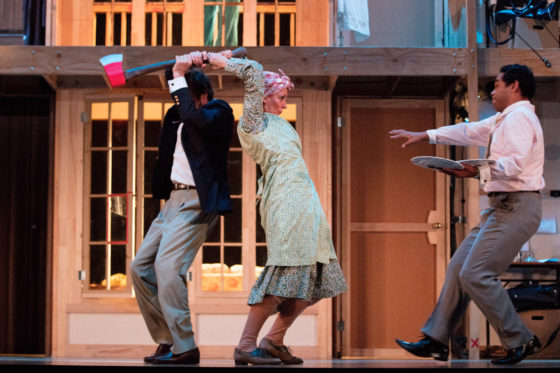 I haven’t figured that one out yet although it could simply be down to my ageing brain slowly cranking down to what will eventually be a complete halt.
So here goes with a quick description of the ingenious, but simple, technique created by the brilliant Mr Frayn.
The play opens with director Lloyd Dallas (Simon Burke) trying against the odds of missed cues, fluffed lines and interpersonal clashes of personality conducting a run through of a farce called Nothing On, late in the evening just before opening night.

Apart from the stage manager Tim (James Saunders) and assistant stage manager Poppy (Emily Goddard), there’s six cleverly inept actors taking the audience through this typical farce with a scantily dressed leading lady and predictable scenes of doors opening and closing (most of the time) and trousers falling down.

The six players – and in reality they all having impeccable timing to carry this off – include a sleazy real estate agent (Ray Chong Nee), his saucy semi-naked girlfriend (Libby Munro), a dim witted author (Hugh Parker), his smarter sexy wife (Nicki Wendt), a sardine promoting char lady (Louise Siversen) and an ageing alcoholic burglar (Steven Tandy).

Watching them muddle through their parts with the noises off coming from the director (Burke) is funny enough, but when in the second half the set swings around to reveal the antics behind the scenes it is downright hilarious.
The actors – the ones in the play Noises Off – all live in a world of confused angst thanks to their tangled relationships, which include as much romantic intrigue as the characters they play on stage.

The action in the second half is both fast and furious as they struggle to hold things together both off and on stage with alcohol (whiskey that is) and sardines playing major roles.

Being inept is – I am sure – not as easy as this superb cast makes it look and everyone plays their part to the hilt as the production rolls onto a first class conclusion.

Frayn got his brilliant idea – he once revealed – while observing an earlier farce starring Lynn Redgrave being played out as he watched from the wings.

He decided that the behind the scenes business was every bit as funny – if not funnier – then what was happening on stage, but his magnificent idea takes nothing away from his consummate skill as a writer.

This is one of those ‘not to be missed’ shows playing at Brisbane’s Playhouse Theatre until June 25.