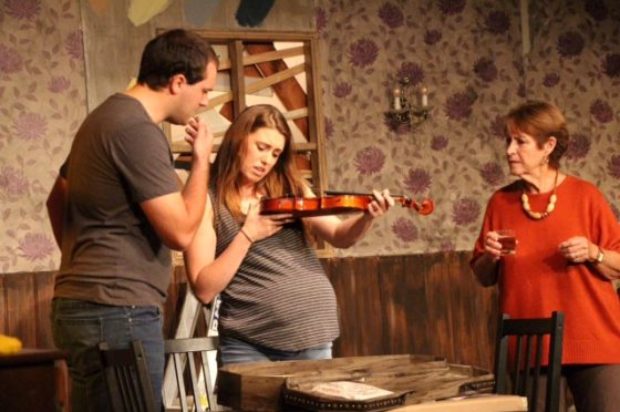 This gentle easy going family comedy, which explores the popular genre of benign ghost stories, follows the fortunes of a stressed expectant couple battling to renovate a family home with the tiresome interference of well-meaning mums and one shape-tongued dad.

That could have been entertaining enough, but the playwright ups the ante with a supernational twist and an invisible presence, who simply wants to get a life a century after she has passed away.

The problem is our ghost, who seems to have had a bit of baggage in her own life, needs to find her self-expression through one of the family members.
Much of the first act’s humour centres on the fraught ambitions of husband Tom and pregnant wife Lilly’s (Adam Hellier and Francesca Spear) to get their inherited house in a fit state to live in.

The banter isn’t exactly fall about laughing funny but it gives a calm rib tickle, while Adam and Lily bring enough charm to their roles to win an audience over.

Tom is the family fixer with a few cutting asides, when estranged mum Helen (Virginia Leaver) and dad Brian (Bob Allen) come on the scene, while Lily is in the way of rebel without a pause.
It’s is a classic tale of an interfering mum-in-law trying to rule the roost, while her former hubby tosses barbs into the mix.

The set-up gets a little more complicated when Lily’s mum, a fear spirited ageing hippy-type Fiona (Linda Furse), gets into the fray.

Everyone is getting along in a reasonably dysfunctional way – despite appearing to be losing the battle to save the house – until things get really fraught thanks to an unknown spooky presence.
The house, of course, has a past, and a colourful one at that, and in the tradition of plays such as Blithe Spirit it’s simply not going away quietly.
While I would have liked to have known more about the play’s haunting element, Obsession has enough charm to carry an audience through to its confrontational end.

I last saw Adam in Billy Liar and I like his stumbling style, while Francesca can be both feisty and contrite in equal measure.
The mums and dad are well developed supporting characters, with clearly defined personalities, and the dozen or so set builders have done justice to the dilapidated front room (where the action takes place).

I know community theatre works – by necessity – on a tight budget, but I thought that this play could have benefited from what’s popularly known as multi-media.
Watching the action unfold – particularly in the second act – I could envisage images of our unwanted Victorian friend wandering through local fields and paddocks projected onto the back wall.
Overall I think Kellie Silver is a promising talent with a feel for character and an ear for amusing dialogue.
This is a production with old-world charm, which offers a comfortable uncomplicated night at the theatre.