On Centre Stage :The Kingfisher by William Douglas Home. 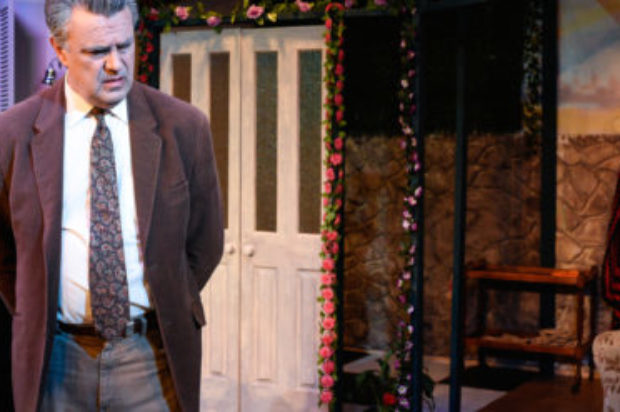 The Play that Acts Up.
The Kingfisher by William Douglas Home.

William Douglas Home’s 1977 play The Kingfisher has exquisite manners or should that read impeccable taste?
Indeed it has both and that shouldn’t come as any surprise considering Home’s pedigree.
The Eton and New Collage Oxford educated brother of former British Prime Minister, Sir Alex Douglas Home, who only died in 1992, but could have well lived comfortably in the 19th century, has penned a wonderfully cryptic romantic comedy.
And director Nathan Schulz – topped off on opening night with a funny looking hat so much converted by the young artist set – has brought it to the Javeenbah Theatre with great aplomb.
This production is as faithful as its characters but despite its thoroughly traditional constraints it offers the audience a tantalising web of mystery.
On the surface it is a simple three-hander about a successful author – Sir Cecil Warburton (Chris Hawkins) – making a bid to reclaim the love of his life, Evelyn Rivers (Viviane Gian), whom he kissed under the beach tree a life time ago (1928).
She been married to his revival, Reggie Townsend, for the past 50 years but now he’s dead and gone, Sir Cecil is hoping to rekindle their flame in one romantic night.
Meanwhile, his faithful manservant Hawkins (Graham Scott) watches on with the little green God jealousy sparking in his eyes.
The audience is left wondering who wants who and, more importantly,who wants who enough to make the highest bid?
It is all very delicious in a sort of Celtic restrained way although possibly somewhat wordy for contemporary audiences.

It’s all terribly, terribly, terribly set over a night and a morning in a delightfully twee cottage in the country – Home Counties of course – as the characters all draw their comedy from being as sloshed as a parrot (or should that be a Kingfisher).
It sounds on the surface out of place and out of date – although the three cast members are a delight – but strangely its allure lies just below the simple story.
I found myself coming out of the theatre asking a myriad of questions about the relationship of the three characters, their motives and their hopes and fears.
There’s no sex – they are of course British – but we wonder about their desires.
This Javeenbah Theatre Company production has a lot going for it – scenery, acting, farce (drunken humour), romance etc, etc – and the true mystery which is so much part and parcel of the human heart.
In this time of fast and furious over-the-top entertainment why not slow down a bit and savour some Javeenbah magic?