On Centre Stage We’ll be Riding with the Horses Yeah, Yeah. 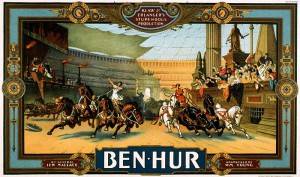 There has been a lot of horsy conversation swirling around the Brisbane arts scene since Cavalia came to town so OCS decided to  take a closer look at the story of our equine stars  in  arts and entertainment. The result is an scintillating account of a golden theatrical period in equine performance and the story of one of the most remarkable productions ever staged. That’s next time. So Watch This Space!

We’ll be Riding with the Horses Yeah, Yeah.

Cavalia: A Magical Encounter Between Human and Horse  will be in Brisbane under The White Big Top until April 7 before heading off to Sydney (May 15) and finally Melbourne (August 7).

For some reason the old Rickie Lee Jones song, The Horses, which gave Daryl Braithwaite an Australian number one in 1991, kept buzzing around my head  while watching the Cavalia premiere.

This celebration of the close relationship between man and horse – stretching back centuries – reflects the magic which exists between a trained rider and his equine charger.

The show, which has been described as an Equestrian Ballet, is a romantic, and sometimes mythical, mix of dressage and high-speed daring stunts.

The showmanship and the drama – featuring 44 stallions and geldings and 36 acrobats – are played out in a 50-metre wide arena facing a 2000-seat auditorium under a 10-Storey Big Top.

It’s said to be one of the biggest tents of its kind in the world, but hardly big enough for more than 40 these beautiful creatures at one time.

Each individual session features around nine or 10 horses, but that’s enough to create a powerful theatrical image drawn from both the ancient world and a fairy tale adventure.

The production – which was launched 10 years ago in Canada by one of the Cirque du Soleil’s co-founders Normand Latourelle – has a highly sylised visual quality.

So having played to 3.5 million through North America and Europe since its inception, I doubt we have heard the last of Cavalia in Brisbane. 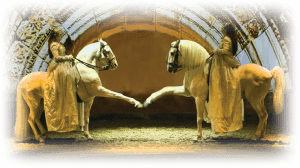 Anytime between 10am and 2pm is okay on Tuesday.The production is full of attention to detail including the rider’s long hair, which streams out from behind their heads and seems to mimic the horses’ swishing tails.

The overall image – and its all done with lights, mirrors and high tech effects I suspect – is one of a surreal nether land where human and horses can play endless games from the subtlety of an intricate step to lightening speed of a chase complete with Wild West-style stunts.

Cavalia might have conjured a pop song soundtrack in my mind, but the musicians and dancers, used mostly in the balcony scene, had a much more serious tone and classical theme throughout.

It served to underscore the majestic riders and their mounts as well as adding to the overall gravitas of the show emphasised in several exquisite solo efforts.

The show started with slow and disciplined demonstrations of the horses and riders skill, but ended with a thunderous display of sheer bravo.

I could have watched the horses all night – they were fascinating – and I reckon if there’s another life to be had I’d like to come as a stallion.

(But I wouldn’t gallop for just anyone.)