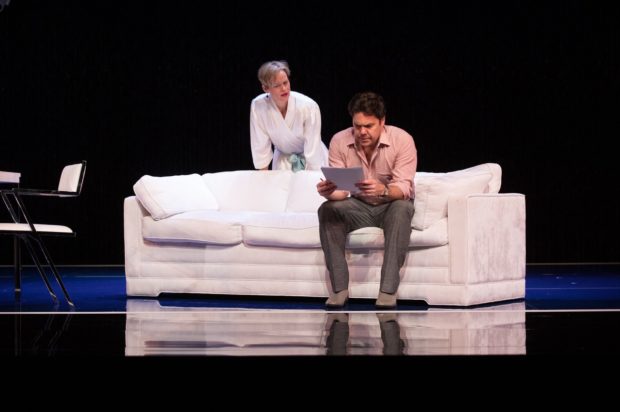 With well over twenty years of experience under his belt, Jason Klarwein can easily be considered one of the best in Australian theatre. With his latest production, he stars in is Emerald City, currently at Playhouse QPAC, Our spotlight on Jason was directed on about the production, working with director Sam Strong, and celebrating playwright David Williamson’s 50th anniversary. Emerald City was originally written over 30 years ago, back in 1987. How are the themes still relevant today?

The play is about the marriage of a professional couple trying to balance their artistic integrity with commerce. It’s capitalism meets idealism meets comedy. My character Colin is having a hilarious midlife crisis in which his values are being uprooted and thrown away.

David Williamson is celebrating 50 years in playwriting this year. Does this show have any commemoration for this milestone?

Williamson’s work is being produced all over Australia this year to commemorate his contribution to Australian theatre. David has been highly involved in our rehearsal process.

Sydney is called the ‘Emerald City’ of Oz. Do you think in our current day and age that that moniker and reputation is still true?

Well we still live in a country that has old fashion colonial ideas about itself. We, as Australians, often think the grass is greener somewhere else. We tend to ‘punch down’ on regional Australia. And in the past and some of the present, England and America are destinations that people fled too for a ‘better’ life. This has to do with our colonial origins. Sydney was the city that accepted the mantle of ‘the best’ and told everyone it was. I think some people still believe this nonsense.

Working with director Sam Strong, how has the experience been preparing for the role of Colin?

David’s writing has the perception of being ‘realism’, but actually the biggest learning for me on this show was to realise that David’s writing is actually a highly literate and sometimes poetic style that the actor needs to make look like ordinary conversation. Sam and I spent a lot of time working on this performative balance

You are considered one of the best names in the industry, having been working in theatre for over twenty years. How do you best describe the amazing growth you’ve witnessed in the Queensland arts industry?

Thankyou that is a very kind thing to say. Queensland has had many fluctuations in its performance output and attendance. We are in a high time of extremely good output of content and the country does look to us more and more for our unique style of work. Unfortunately there needs to be more of a commitment from our local companies to employ more local actors otherwise the old ‘talent drain’ will keep continuing as young artists leave us for the fake greenery of elsewhere. We need to be proud of who we are, where we have come from and what we have achieved