The original master of suspense, and one of the most popular and influential directors in film history, will be celebrated in the ALFRED HITCHCOCK RETRO FILM FESTIVAL – the first of its kind in Australia.

This festival runs from July 21 to August 10 and showcases fifteen of the auteur’s films from the first twenty years of his Hollywood career, including Hitchcock’s personal favourite of his films.

“There are two things that have long staggered me about Alfred Hitchcock. One is that he never received a Best Director Oscar, and the other is the fact that there has not been a public festival of his films ever in Australia. I can’t do much about the first but I’m delighted to have been able to address the second and put this festival together,” Dravet said.

“So many of these films haven’t been seen on a cinema screen for more than 20 years. I wanted to assemble a selection of his films that covers the obvious classics, which never get tired, like PSYCHO, VERTIGO and REAR WINDOW as well as rarely seen gems such as LIFEBOAT, FOREIGN CORRESPONDENT, I CONFESS and THE WRONG MAN. And Hitchcock’s favourite is in the festival too – the remarkable SHADOW OF A DOUBT.” 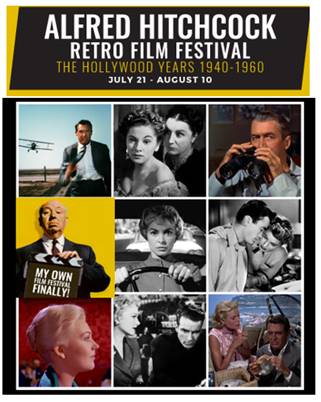 The festival also complements the release on July 21 of the documentary HITCHCOCK/TRUFFAUT, an exploration of the series of interviews conducted between the two great directors, which will screen exclusively at the Orpheum.

Full list of films in festival: Dial M for Murder / Foreign Correspondent / I Confess / Lifeboat / North by Northwest / Notorious / Psycho / Rear Window / Rebecca / Shadow of a Doubt / Spellbound / Strangers on a Train / The Wrong Man / To Catch a Thief / Vertigo – for synopses of each film, or session details, use this link: http://www.orpheum.com.au/newsletter/2016-06-W5/hitchcock/