PEKING DUK RELEASE BRAND NEW VIDEO FOR ‘LET YOU DOWN’

ICONA POP LET YOU DOWN music video release PEKING DUK Sony music by Caroline Russo | on November 13, 2017 | 0 comments | in Music | Like it 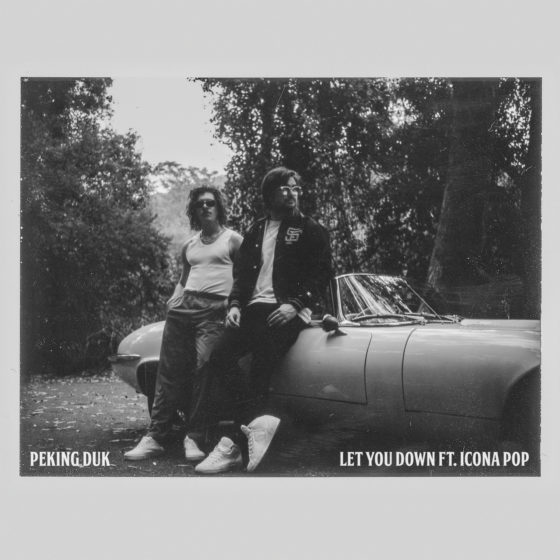 Flowing through the different stages of heartbreak, Peking Duk and Icona Pop have created the perfect break-up song for their generation. With razor-like synths and thundering drum beats, the electrifying rhythm in ‘Let You Down’ beautifully contrasts with both artist’s emotive vocals and sad lyrics. Directed by Nick Colla (Late Nite Films – Gang Of Youths, RUFUS, Cosmo’s Midnight), the video is an exaggerated take on the lyrical themes of the track.

Nazeem Hussain has said of the video; “I got to play a guy whose significant other would rather set herself on fire, jump into traffic, out of a car, and off a cliff – than fall in love with me. I was definitely playing against type, and my ego was not bruised in the slightest in the making of this video.”

Peking Duk talk about their involvement in the video; “It was fun doing things for a music video that we hadn’t done before like working with stunt doubles. At the end of the day it’s just a fun light hearted clip. Keep an eye out for the cameos!” They also discuss the inspiration behind the song: “It is loosely based off the story in the movie Candy from Heath Ledger’s perspective. We honestly just felt like the happy melodies would be far more interesting with a sad story through the lyrics. Weirdly, the story in Candy is far more relatable than it seems on first glance. Many people are actually in scenarios or relationships where they know they are bringing the other person down. This is the hard part; trying to tell them to leave so you don’t let them down.”

Maria Angelico also discusses the video; “Shooting Peking Duk’s ‘Let You Down’ video was possibly one of the funniest times I’ve ever had on a shoot! It was like being in an action film, but a short one with really funny guys and a killer soundtrack! Also, I’m seriously hoping people think I’m a total boss and did all my own stunts, which I definitely did not… Ha!”

The release of ‘Let You Down’ has been one of Peking Duk’s most successful to date. ‘Let You Down’ has raced to 4 million streams globally and has already hit #2 on the ARIA Australian Artist Singles Chart, top 10 on the Australian airplay chart and Shazam Chart as well as top 20 on Australian iTunes, Apple Music and Top 40 on Spotify Australia.

‘Let You Down’ follows the buzz from Peking Duk’s incredible performance at Splendour In The Grass which has been hailed as “one of the most insane sets of the entire weekend, possibly even in Splendour history” by Huffington Post and similarly as “one of the best sets of Splendour 2017” by Pedestrian.TV.