Amity Dry brisbane events cabaret GIVE AWAY war story staged by Caroline Russo | on May 23, 2019 | 0 comments | in Competitions | Like it 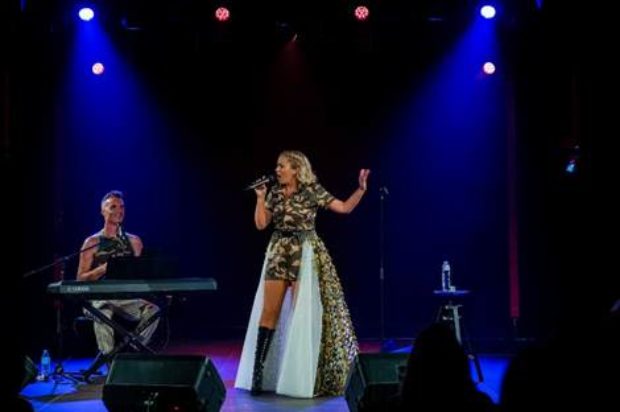 Amity Dry returns with a powerful new cabaret show FORTIFIED
This is a war story. But there are no guns and ammo, just angry words and hurt pride. It’s a story about blowing up your life and starting again. About divorce, love, loss and discovering a strength you never knew you had. This is Amity at her most raw and heartfelt and if you loved her smash hit ’39 Forever’ it is not to be missed!
“Fortified is raw, vulnerable and powerful. Created and written by Dry, Amity walks us through her life and inevitably how she’s changed being the hopeful young 19-year-old who fell in love for the first time. The show opens with a fairy-tale. A Princess, and Prince and Happily Ever After- or so the Princess thought. Now a divorced performer and mother of two Amity sheds insight into life now. On top of the amazing performances and storyline, there is notable effort and time behind the details of the show. From the onstage banter between Amity and her Musical Director, Jamie Burgess, to the way Amity interacts with the audience, flawless would be a good description.” The Iconic Blonde

“Showcasing powerhouse vocals to rival any musical theatre diva…incredible talent as a composer and lyricist…enough tenderness to pull at your heartstrings and plenty of warmth and humour to ensure you leave smiling and thoroughly entertained.” Theatre People
“Dry’s vocal performance is impressive enough on its own to warrant the cost of entry.” Beat Mag
★★★★★ Glam Adelaide ★★★★★ Theatre People ★★★★ The Advertiser ★★★★1/2 The Adelaide Show ★★★★ Beat Mag

Amity Dry was previously best known for ‘The Block’ and her top 10 album ‘The Lighthouse’ but these days it’s her cabaret shows and musical that generate the most buzz. Her show ’39 Forever’ was a smash hit in the 2017/ 2018 Adelaide Fringe, selling out its 15-show season and receiving multiple 5-star reviews. It went on the play the Melbourne International Comedy Festival with great reviews and tour nationally.
Amity’s original musical ‘Mother, Wife and the Complicated Life’ premiered in the 2011 Adelaide Fringe and went on to play over 100 shows nationally to critical acclaim. It’s played the 2014 New York Musical Theatre Festival, ‘Commission for the Status of Women Conference’ at the United Nations and is currently in development for a 2019 UK tour with the new title The (M)other Life.

Enter to be in the draw for double ticket to see Amity show by sending your name address phone contact to [email protected]
To qualify you need to subscribe to our Utbue channel Caroline Russo at https://www.youtube.com/user/Hushhush9201
add that you done that or are. Winners will be notified for the win and GOOD LUCK