Petronella and the Janjilons 2nd VOL 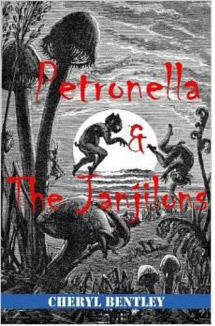 Following Cheryl Bentley’s much-celebrated ‘Petronella & The Trogot’, ‘Petronella and the Janjilons’ sees the literary world’s most fearless new young maverick in a race against the clock to stop children from being destroyed. But why could they face death, and who is holding them captive? Read on! It’s an adventure one critic recently hailed as “… a great book for reluctant readers … A good fantasy read with good vs. evil”.

United Kingdom – One reviewer couldn’t have explained it better, “Cheryl Bentley does not write boring books”. She proved this with gusto with the release of ‘Petronella & The Trogot’, the first in a compelling new series about a young girl trapped deep in a dark fantastical world where living is a daily battle in itself.

Bentley is now back with volume two, ‘Petronella and the Janjilons’. It’s an intense romp into the lives of an evil judge, some strange monkey-like creatures and a band of innocent children whose own brainpower has become their worst enemy.

The Janjilons are not what they seem. They look like a type of monkey but they are really children. How did they turn into Janjilons? And could it happen to anyone?

Behind this mystery is someone evil, Judge Ormerod who wants to be the next Duke of Westshire. With the help of three weird sisters, he has to rid the land of clever children from being an obstacle to him. The Janjilons work for him as the three sisters mete out punishment and keep them locked up.

Petronella starts to look into these strange happenings. But time is running out because when the Judge no longer needs the Janjilons, they will be destroyed.

“I felt that the YA Fantasy market needed a dose of literal new blood, a re-birth into something that moved away from the vampire and zombie novels that have flooded the scene, all while retaining the classic hallmarks of the battle against good and evil,” explains the author, whose first book was translated and published in both Brazilian Portuguese and Chinese. “I think I hit on a winning formula; it’s a true fusion of an innovative new theme within a genre that is timeless.”

Continuing, “Early reviews have been overwhelmingly positive, and book three is currently in the works. But I won’t say any more than that at this stage!”

Jo Anne Hakola adds, “There are three witches, a hidden school and a lot of evil in this story. You’ll meet characters that will surprise you and the ending is great. Ms. Bentley does not write boring books. I can see a young one reading this book more than once. Maybe they can even write a story of their own…”

Bill Baker writes, “You’ll have to jump on this fast moving fairy tale thriller to find out what happens…”

‘Petronella and the Janjilons’ is available for pre-order now: http://bit.ly/1zO6F5Q.

Cheryl Bentley is from Bedford. She spent many a happy hour of her childhood reading and sucking sweets by the banks of the River Ouse or in the home of her carer Marian.

She has a degree in English from the University of London.

By day she works, by night she writes.