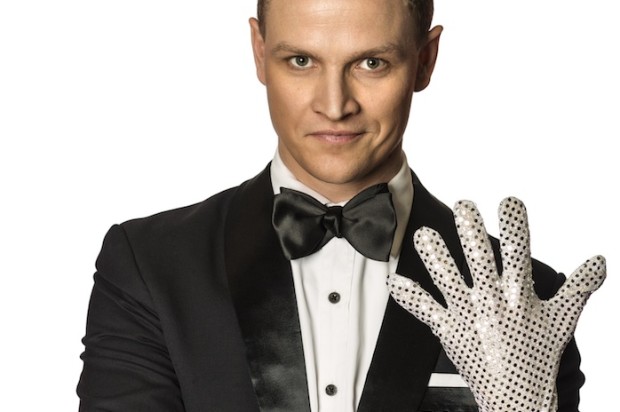 QA on Luke Kennedy as to his new show to be staged with Joel Turner (ARIA winning artist & world beatbox champion)
“Smooth Criminals”  The Songs Of Michael Jackson
at the Brisbane Powerhouse. The duo will bring the music of their mutual idol to life – Michael Jackson – in a way that it has never been seen or heard before. In a world first, Luke’s smooth, powerful & dynamic, voice will sing Michael Jacksons greatest hits, whilst all of MJ’s iconic beats, rhythms and sounds are made using only Joel’s mouth and a microphone.

1. Luke you been in such amazing shows specially this year this one is quiet a unique act how did this first come about?

As with most great ideas, the idea for this show came from a number of little sparks of inspiration, and a touch of good timing. Chris Wayne started tossing around some ideas with me about a Michael Jackson show after seeing me perform a version of Billie Jean with Mark Sholtez in 2014. Chris knew I loved Michael Jackson, and the idea of presenting MJ songs in a brand new way excited us both. When Chris had the idea of putting Joel Turner and I together on stage, with that combination of Joel’s unique talent, and my classical music background, I knew we were on to something. Throw in the challenge of unpacking Michael Jackson, and I just HAD to see what we could come up with.

2. How much work does it require to develop the act between you and Joel Turner?

It takes hours and hours of work to develop a show like this. A lot of Michael Jackson songs are the sort of songs that are so iconic that you dare not mess with them. So if you’re going to cover MJ, you better be sure that it’s world class; and that is the approach we are taking with each and every song in this show. It takes time and patience, but the result has been amazing.

3. What song list will be expected in the show?

Obviously in this show you’re going to hear a lot of Michael’s greatest hits. But MJ has so many CLASSIC songs that deciding what goes in, and what doesn’t has been a big exercise. We could easily just get up and sing a concert of Michael’s number ones and I’m sure a lot of people would leave feeling satisfied, but we are interested in delving deeper than that. Michael wasn’t just the sum of his eccentricities (the moon walk, the crotch grabs, the “he-he”’s and “chamone”’s), he was a once-in-a-lifetime vocalists, with an undeniably creative imagination, and a point to prove. That’s what we are exploring, and that’s what you can expect from this show.

4. Will there be any other highlights or surprises you can tell us that you be performing?

I wish I could tell you that you’ll see me doing the moonwalk, but I can promise you these is 0% chance of that.

5. Is this something you looking at doing more as to teaming up with other performers?

In this show, Joel and I will be doing the majority of the heavy lifting, but we’ll also be collaborating with 2 world class multi-instrumentalists to create this epic and intricate music.

6. Is there other performers that you would love to explore that you are a big fan of?

At this stage, I don’t feel like there is anyone better than Michael Jackson to explore in this way. The Beatles, or Paul McCartney and John Lennon each as individuals would be cool to unpack. Really though, there is no one better than MJ.

7. The music industry is one of the toughest for anyone now to enter what your first piece of advice to them?

8. If you had a wish list to perform with in a band selection who would that be?

9. What are you 5 favourite things to do?

Some of them I can’t list in a public forum, but like most folks I enjoy downtime with the people I love, and I am a keen golfer and basketballer.

10. Anything you would change so far in your life?

I’d learn piano from a young age. I’m rubbish at it.

11. What has been the best thing that you feel you have achieved?

In my career? I’d say it’s being able to say that I have now been a full time professional musician for almost 10 years. That’s the thing I am most proud of.

12. What your favourite City, Food, and colour?

City: Sandefjord, Norway.
Food: I could always go for Japanese.
Colour: I can’t decide between green and blue.