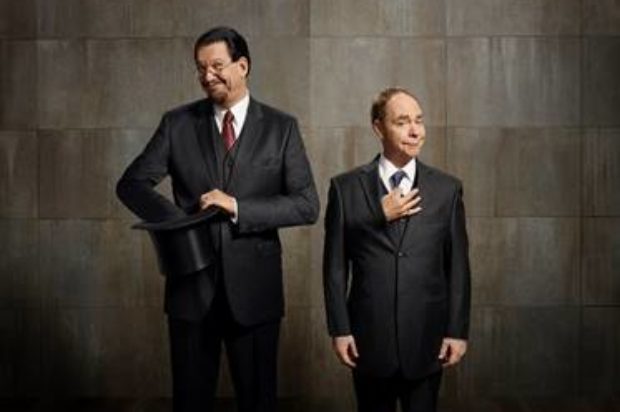 Penn & Teller today announced they will appear at Queensland Performing Arts Centre’s (QPAC) Concert Hall from 7 to 11 April 2020 for their first ever Australian shows, in the magic duo’s 45th year of working together.

The pair were to perform at QPAC in January, however due to Teller requiring emergency surgery, Penn & Teller’s Australian tour to Brisbane and Sydney only was postponed at the end of last year.

Of their Australian debut, Teller says “I’ve loved Australia for the last 30 years – I learned to scuba dive in Cairns; I’ve eaten gelato on Sydney’s Circular Quay, and seen Shakespeare at the Opera House; I’ve scouted an underwater TV special near Melbourne; I’ve been bug-eyed at the naked sculptures at MONA, the amazing underground art museum in Hobart.

“On Fool Us! I’ve been fooled twice by Gold Coast magician Helen Coghlan, the most devious woman alive; about a fifth of our audience in Las Vegas is Australian, and some of my dearest friends live there. So it’s about bloody time we brought our show Down Under, don’t you think? We are so excited to be performing in Brisbane and Sydney. See you in April!”

Dubbed “the greatest performing duo in showbiz” by Jimmy Fallon, for more than 40 years Penn & Teller have defied labels — and at times physics and good taste — by redefining the genre of magic and inventing their own very distinct niche in comedy.

With a star on the Hollywood Walk of Fame, Emmy®-winning TV specials, sold out runs on Broadway; hundreds of outrageous appearances in everything from Friends, The Simpsons, The West Wing and The Big Bang Theory; and couch time with Conan O’Brien, Jay Leno and Stephen Colbert, comedy’s most enduring team shows no signs of slowing down.

Chalking up an amazing eight wins as ‘Las Vegas Magicians of the Year’, their 19-year run at Rio All-Suite Hotel and Casino makes them the longest-running and one of the most-beloved headline acts in Las Vegas history, outselling every other resident magician on The Strip.

They currently host the hit series Penn & Teller: Fool Us!, in which up-and-comers and magic veterans try to fool Penn & Teller for a chance to star in the duo’s hit Las Vegas stage show. The series was nominated for a 2017 Critics’ Choice Award and will return for a seventh season this year.

Their Showtime series, Penn & Teller: Bullshit! was nominated for 13 Emmys® and was the longest-running series in the history of the network. The show tackled the fakes and frauds behind such topics as alien abduction, psychics and bottled water.

Along the way, they have written The New York Times Best Sellers, hosted their own Emmy®-nominated variety show for FX, starred in their own specials for ABC, NBC and Comedy Central, and produced the critically lauded feature film documentary The Aristocrats.

Their documentary, Tim’s Vermeer, follows Texas-based inventor Tim Jenison on his quest to discover the methods used by Dutch Master painter Johannes Vermeer, and was nominated for a BAFTA and shortlisted for the 2014 Oscars.

As inclusions in The New York Times Crossword and answers on Jeopardy and Who Wants to Be a Millionaire, Penn & Teller’s status as cultural icons and the preeminent duo in comedy was reinforced when Katy Perry personally asked them to co-star in the video for her smash hit Waking Up in Vegas.

As individuals, they are just as prolific. Teller directed versions of Macbeth and The Tempest that toured to rave reviews from The New York Times and The Wall Street Journal, co-wrote and directed the Off-Broadway thriller Play Dead and has written two books.

Penn has written three books including The New York Times Best Sellers God No! and Presto. He hosted the game show Identity, donned his ballroom shoes for Dancing with the Stars, and showed his business savvy on two seasons of All-Star Celebrity Apprentice.

Penn & Teller will perform at Sydney’s Capitol Theatre, presented by Sydney Opera House, from 14 to 21 April 2020 following their QPAC season. Tickets for Penn & Teller’s Brisbane shows are on sale from 30 January via qpac.com.au or 136 246.