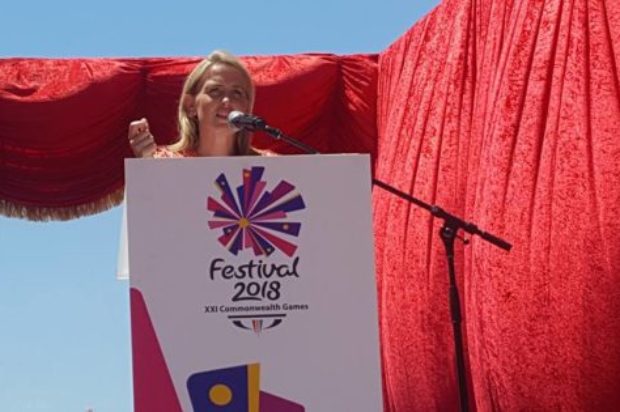 Queensland ready to celebrate Festival 2018
Commonwealth Games Minister Kate Jones today launched the largest arts and culture program in Queensland’s history – releasing the full Festival 2018 program to the public.
The Gold Coast 2018 Commonwealth Games (GC2018) arts and cultural program will bring 12 days of performances to Cairns, Townsville, Brisbane and the Gold Coast.
Ms Jones said Festival 2018 would bring together local artists with some of the world’s best and most recognisable acts.
“More than half of the 3,500 performers are from Queensland. We’re giving local performers a chance to rub shoulders with some of the biggest acts on the planet and we’re showcasing Queensland talent to a global audience,” she said.
“This will leave an important arts and cultural legacy for the state.
“Aside from the sporting action at the Commonwealth Games, this entertainment program is a world-class in its own right.
“Festival 2018 is an opportunity to expose Gold Coast audiences to some of the most sought after arts and culture acts in the world right now.
The Festival 2018 program includes rock musician Ian Moss, singer-songwriter Kate Miller- Heidke, duo Busby Marou and party band The Cat Empire.
Minister Jones said Festival 2018 entertainment included music, film, dance, circus and street theatre, as well as free family friendly events for everyone to enjoy.
“Locals and visitors will have the chance to experience a diverse range of concerts, performances, exhibitions and street arts that include national and international acts,” she said.
“These events can only be successfully delivered through strong partnerships and I would like to thank the City of Gold Coast, Brisbane City Council, Townsville City Council, Cairns Regional Council and the Gold Coast 2018 Commonwealth Games Corporation for working together with the Queensland Government to make this initiative happen.”
Arts Minister Leeanne Enoch said Festival 2018 would excite, intrigue and inspire, with the program featuring more than 3500 performers delivering over 500 events on the Gold Coast, in Cairns, Townsville and Brisbane.
“Emerging and renowned Queensland talent will join world-class artists from across Australia and all parts of the globe, while Aboriginal and Torres Strait Islander culture unique to our state will feature alongside other First Nations artists from the Commonwealth,” she said.
“Over 12 days, Festival 2018 will create a palpable energy in Queensland which will leave a positive legacy for our arts and culture sector, and it will help further enhance our global reputation as a world-class destination.”
Ms Enoch said the Festival would create a positive legacy through its programs and investment in the arts as well as deliver growth and development to the arts and creative industries.
Festival 2018 will also include the One Million Stars to End Violence, an inspirational community project displayed by the Museum of Brisbane in King George Square and across Festival 2018 sites featuring stars contributed by star weavers across the world to inspire light, hope and peace.
The Women of the World (WOW) at Festival 2018 will celebrate achievements, encourage dialogue and identify ways to support women and girls to overcome barriers and achieve their full potential. WOW will be staged at the Brisbane Powerhouse from 6-8 April.
For more information on Festival 2018, visit www.gc2018.com/festival2018.