Actors ASSASSINS Gold Coast MUSICAL javeenbah THEATRE REVEIWS by Caroline Russo | on March 14, 2020 | 0 comments | in On Centre Stage | Like it

Music and lyrics by Stephen

Sondheim and a book by John Weidman, based on an original concept by Charles Gilbert Jr. Javeenbah Theatre Company. Ensemble cast of 15. Directed by Katie Steuart-Robins. Musical direction by Taylor Holmes. Season runs until March 21.

Stephen Sondheim’s Tony Award winning off-Broadway musical Assassins is an unusual musical, but then the composer and lyricist is no ordinary talent.
In some quarters he is one of the most revered composers and writers working today, but his controversial artistic vision does have its detractors.
The 89-year-old launched his remarkable career as a lyricist for two of Broadway’s all-time hits West Side Story (1957 for composer Leonard Bernstein) and Gypsy (1959 with composer Jule Styne).
In the following years he created a string of hits as composer and lyricist including A Funny Thing Happened on the Way to the Forum (1962), Company (1970), Follies (1971), A Little Night Music (1973), Sweeney Todd: The Demon Barber of Fleet Street (1979), Sunday in the Park with George (1984) and Into the Woods (1987). 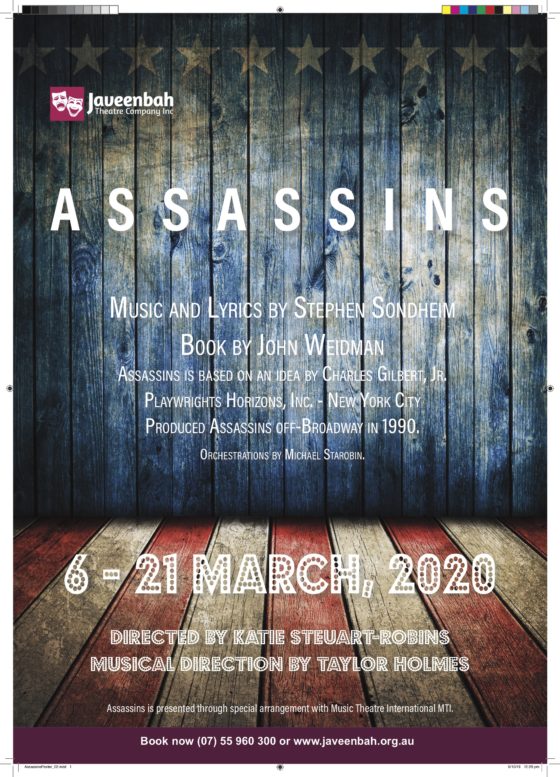 As time goes by Sondheim has not shied away from difficult and sensitive themes and his 1990 off-Broadway, revue, based on historical figures who have assassinated – or tried to assassinate – US presidents, Assassins, must rank among the most challenging.
When the show first opened in 1990, it received mixed and negative reviews, but 14 years later a revival earned good notices and won five Tony Awards, including best revival of a musical.
I guess that’s what’s known as being ahead of your time and now Nerang’s Javeenbah is presenting it to the Gold Coast with a larger than usual cast of 15 under the excellent guiding hands of director Katie Steuart-Robins and musical director Taylor Holmes, who do a first class job of holding this ensemble cast together .

For the record the four presidents assassinated were Abraham Lincoln (John Wilkes Booth – 1865), James Garfield (Charles J. Guiteau – 1881), William McKinley (Leon Czolgosz – 1901) John F. Kennedy (Lee Harvey Oswald – 1963), and several other attempts were made on Ronald Reagan, Gerard Ford, Ricard Nixon an Franklin D. Roosevelt.
The show opens in a fairground shooting gallery and has the air of vaudeville as we travel through time meeting the significant historic characters.

The music and songs are colorful and engaging as the show captures both the mood of the various times and the resentments driving the angry protagonists.
Sondheim, who once said he excepted a backlash from a public disturbed by the content commented to the New York Times: ”There are always people who think that certain subjects are not right for musicals…(w)’er not going to apologise for dealing with such a volatile subject. Nowadays everything goes.”
For this critic the subject matter is too far away in time and place to cause more than a little discomfort and the cast does a first class job.
When Javeenbah had its terrible fire – many years ago – and directed its considerable energies into re-building I wrote about it as a ‘plucky little company’, always working on its front foot and that holds true to this day.

There’s always a place in the theatre for perianal favourites and also challenging innovative works.

Note Douglas Kennedy Javeenbah Theatre Company member and made a conscious decision not to write about individual performances as each of the 15-strong ensemble made a significant contribution to the show’s success.