Review of ‘TRANSFORMERS: AGE OF EXTINCTION’ 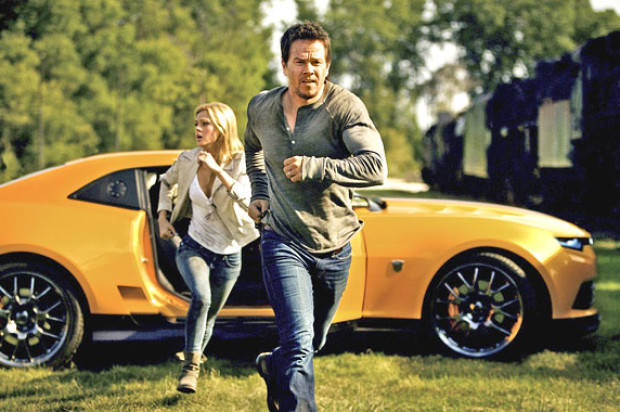 Classification: TBC (Film was unclassified at time of review)

Not that there would be reason to assume otherwise but ‘Transformers: Age of Extinction’ is exactly what a Michael Bay movie should be with long, overdrawn action sequences, appalling dialogue, aesthetically pleasing cast members, and the notion that bigger equals better. Bay’s never been one for subtlety but the previous ‘Transformers’ films look positively tame in comparison as this fourth entrant goes for broke in terms of its set pieces, and at almost three hours running time there’s more than ample opportunity to comprise everything from an opening that includes dinosaurs to a Chinese based finale that’s inexplicable in its opulence.

One thing the film does get right is casting Mark Wahlberg in the lead, playing Cade Yeager, a doting single dad living in Paris, Texas who fancies himself as somewhat of an inventor. As he and his business partner Lucas (T.J. Miller) scrounge through worksites to unearth potential gems for Yeager’s inventory needs, his expansive ranch is on the verge of foreclosure and his 17-year-old daughter Tessa (Nicola Peltz, a more-than-suitable nubile replacement for previous series starlets Megan Fox and Rosie Huntington-Whitely) is threatening to start dating. When Cade locks eyes on a run-down truck he thinks he’s struck gold, and things appear on the up even moreso when the truck turns out to be a Transformer. Now given that the government are looking to track down all the Transformers roaming the Earth and strip them down for their technology to acquire massive amounts of wealth, Cade’s Transformer discovery doesn’t go unnoticed and it isn’t long until they’re all on the run. Cue explosions, sweeping location shots, and slow motion instants of Peltz looking immaculate whilst slightly terrified.

A film like ‘Age of Extinction’ is made with a particular audience in mind, and the teenage fanboys (who ironically are too young to know the brand’s origin) will lap this up but those who still crave intelligence within their seasonal blockbusters will be unsurprisingly disappointed. Bay’s films have always had a distinct mark but even he has been capable of producing cinematic enjoyments amongst his kinetic flare with ‘Bad Boys’, ‘Armageddon’, ‘The Island’ and the original ‘Transformers’ standing as passable affairs. With only three years passing between this sequel and its predecessor, 2011’s ‘Dark of the Moon’, Bay promised something more this time around as ‘…Extinction’ acts as an almost reboot of the series with their being very little connection to the previous trilogy. Evidently it was all just talk to secure a booming opening weekend as this film is more of the same, emphasis on more as its painful 165 minute length is felt with every action sequence lasting longer than it has any right to.

As mentioned earlier Wahlberg is one of the strongest assets, making a far more likeable lead than the overly smug Shia LaBeouf, and Peltz and her on-screen beau Jack Reynor are satisfactory in their delivery and exceptional in their sex appeal. And just as Bay managed to inject some surprise talent in previous films by casting John Turturro and John Malkovich, here we have Stanley Tucci (as an eccentric Steve Jobs-type entrepreneur) and Kelsey Grammer (revelling in the government villain role) throwing their considerable weight around which, admittedly, benefit the film. The 3D is also well utilized, though once again the running time means you’re subjected to sensory overload for an extended period of time, and there’s no denying some of the cinematography is supremely lush, giving the film a look of an obscenely expensive commercial. It’s all just so Michael Bay.

With the humour surprisingly humour-less and the action sequences far too muddled and un-self-aware, it would be acceptable for the series to retire but given the clear intention to begin a whole new trilogy (and apparently Paramount have already set the sequel for 2016) we obviously haven’t seen the last of these Transformers, which I’m sure Bay and his teen enthusiasts are thrilled about. My advice for number 5? Less is more.