The Undoing is new entertainment drama mini-series that has had a lot of promo in building up the modern-day drama series that has been produced by HBO’s will be airing on BINGE on October 26th. Its two main leads Nicole Kidman, who is also one of the producers had to convince actor Hugh Grant to jump in as her husband, which on-screen they do look good together. Playing the father is another iconic actor Donald Sutherland. 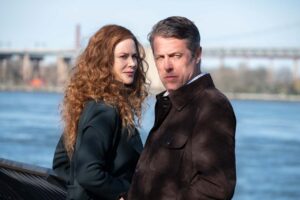 The first look at the two episodes gives you a somewhat intriguing look at what is building up to a who done it murder. The suspect being Grant in the first instance. There is some very impressive camera work done here as to close-ups frames and other widescreen and lavish rooms and locations in New York. Director/ Producer Susanne Bier builds in an experimental way I feel with the drama in slow direction with lots of flashbacks.

Written by David Kelly, this is going to be one to put on the watch list. I am keen to see how this does progress to the courtroom and how they build more in the characters. It very female-driven thriller project which is great to see the work here produced.

Get a two-week free trial no contracts with BINGE