music events nov 18 one night only party boys RICHARD CLAPTON ROSS WILSON by Caroline Russo | on October 14, 2018 | 0 comments | in Entertainment | Like it 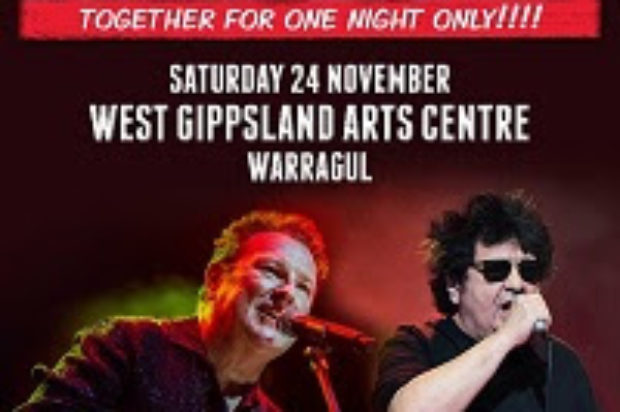 Ross Wilson & Richard ClaptonWhen it comes to legendary musicians, two names that stand out in the Australian music scene are undoubtedly Ross Wilson and Richard Clapton. Both have extensive careers, spanning more than four decades, a swag of hits to their names and have played to more packed houses than they can count. Now, for one very special night, these two iconic performers join together for an incredible double bill at West Gippsland Arts Centre this November. Ross and Richard will take audiences through their amazing back catalogues, performing hit after hit, and rockin’ the night away!

Daddy Cool himself, Ross Wilson, is a legend in the Australian music scene. His live shows are jam-packed with hits and audiences are on their feet from start to finish. A favourite on the festival scene, Ross consistently plays to packed houses and massive crowds. From his time in bands Daddy Cool and Mondo Rock, he has recorded hit after hit. Ross has also had a prolific solo career, and with more than four decades in the industry, he has been twice inducted into the ARIA Hall of Fame. It is no surprise that he is known as one of Australia’s most enduring and beloved performers.

With songs such as Eagle Rock, Cool World and A Touch Of Paradise in his arsenal, its not surprising an evening in the company of Ross Wilson is entertaining indeed. He is also credited for writing hit songs for the likes of Jimmy Barnes, Christine Anu, You Am I, Beccy Cole and The Wiggles, to name a few. Throughout his varied career, he hasn’t stopped writing, or performing, and garners new fans every year.

Richard Clapton is an artist of legendary status. With songs such as Deep Water, Capricorn Dancer and Girls On The Avenue in his back catalogue, Richard has captivated audiences for decades. He released his debut Prussian Blue in 1973 and has never looked back. His fourth studio album – Goodbye Tiger – is credited as being one of the first great Australian rock and roll albums and one that is a landmark in the evolution of Australian music. Apart from writing classic rock songs, Richard also worked with other artists, producing for the likes of INXS.

For a brief stint Richard joined The Party Boys – which resulted in an extensive Australian tour in the early 1980s – and joined the Countdown Spectacular touring concert celebrating the iconic television show. Regardless of any side projects, he has never stopped writing and releasing his own material. Fast forward to current day and Richard Clapton is still making music and still performing to packed houses – he is a true pioneer of the rock scene. With a career spanning more than four decades, he has a wealth of experiences, all of which are channeled into every performance.