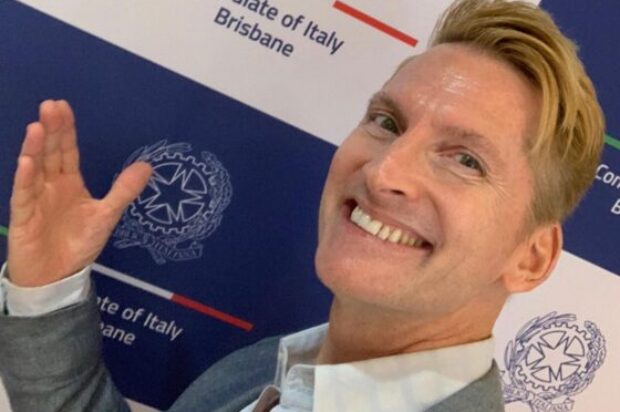 Although he may have an American accent and they call him Mr Hollywood, the man known as the Social King of Queensland, media personality Damien Anthony Rossi, actually has an Italian background with his Los Angeles-based actor/director father’s family (The Rossi’s!) being from a small village called Rossi at the top of a mountain in the Molise region of Italy, three hours drive inland from Rome, having been named after his ancestors who founded the village. The new year will see Rossi getting a lot more in touch with his Italian side with a recent announcement at a special event hosted at the Brisbane Abruzzo Club by the Consul of Italy in Brisbane, Salvatore Napolitano. Rossi has been appointed Ambassador for the “Tour of Italy through Queensland” program that the Italian Consulate will run through 2021 that will involve events throughout the state showcasing the cultural, social and gastronomical traditions of the 20 regions of Italy as well as prominent Italian Queenslanders sharing their colourful and diverse stories of the motherland. Rossi said “I’m extremely excited and honoured to be offered this wonderful role and look forward to celebrating all things Italian and expanding my friendships within Queensland’s amazing Italian community.” That’s not all he’s looking forward to with Rossi adding ‘I’ll also be taking Italian language courses again for the first time in over 30 years.

I lived and studied Italian in Florence when I was in my early 20’s but that was a few moons ago so I need to brush up, although I do still remember the words for the important things like pizza, pasta and Prosecco.”