“Wanted:  Somebody to go back in time with me. This is not a joke. You’ll get paid after we get back. Must bring your own weapons. I have only done this once before. Safety not guaranteed.”

Based on an actual classified ad published in 1997, though only constructed as a joke by its writer, ‘Safety Not Guaranteed’ bases its premise on what if the person who wrote the advert was completely serious?  At a Seattle magazine, where story ideas are running low, writer Jeff Schwensen (Jake M. Johnson) ponders this and suggests to his editor that they track down the person behind the ad and profile them.  Approved on the spot Jeff volunteers himself and two interns, Darius (Aubrey Plaza) and Arnau (Karan Soni), to take the less-than-glamorous trip to Ocean View, Washington to seek the advert’s origins. 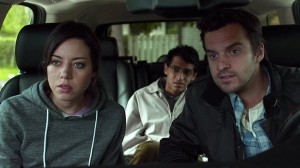 The man responsible is Kenneth Colloway (Mark Duplass), a stock clerk at a local grocery store, who wholeheartedly believes he can time travel and so an initial meeting with Jeff temporarily puts a glitch in the assignment when Kenneth can see that Jeff is purely there to mock him.  Disillusioned by her surroundings Darius proves the best candidate to approach Kenneth and convince him she is there for the right reasons and actually wants to time travel with him.  Gradually she sees how genuine he is in his ambitions and that maybe it’s possible.

A subplot involving Jeff tracking down a high-school sweetheart, and his plans to make a man of the shy, virginal Arnau doesn’t prove necessary to the overall story but it is by no means a waste as it showcases the talents of Johnson and Soni, and proves an enjoyable offset to the blossoming romance between Darius and Kenneth.  Like all good time travel features there’s men in suits involved and Kenneth is no exception believing he’s out to be gotten by the government, and what initially comes off as the crazy conspiracies of a paranoid man turn out to be true when government agents make an appearance, only adding to Darius’ burning question of whether or not time travel is real.

Basing a film entirely on a newspaper snippet isn’t the safest idea and on paper it would sound as if this film couldn’t work, not to mention it’s coming courtesy of a writer/director combo that haven’t had any feature length film experience, but amazingly it’s an all-round success.  The pure joy and heart that has been injected into this film is incredibly infectious, and the winning casting of Plaza, Duplass and Johnson is the icing on this quirky cake; Plaza particularly captivating to watch, solidifying herself a career outside her genius work on TV’s ‘Parks and Recreation’.

It’s possible that ‘Safety Not Guaranteed’ will get overlooked due to the amount of films filling the market at the moment, and no household names to reel folks in isn’t helping, but I urge cinemagoers of all ages to give this a look-in as it is truly one of the funniest and warmest films to be released this year.  Safety may not be guaranteed, but blissful entertainment is.

My rating 4/5 (A genuine crowd pleaser)