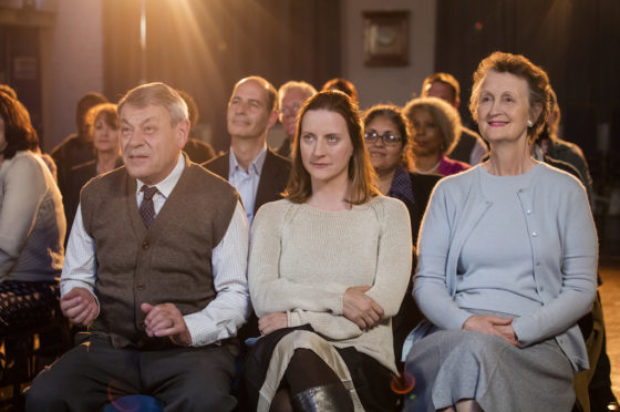 Hush Hush Biz takes a look at the new HBO series Sally4Ever which is the latest brainchild of one of the funniest, and successful, talents to hail from Great Britain in the last ten years: writer/director/actress Julia Davis. It is a seven episode series and we had a look at the first two.

Sally4Ever is a dry, sobering comedy about a woman named Sally who lives with her partner David who is both socially oblivious and ignorant of Sally’s wants and desires in life leaving her feeling deflated. This is until one night where she sneaks out and begins an affair with a direct and lively woman named Emma who seems to re-ignite the excitement in Sally’s life that had been lacking with David.

The story has many unexpected turns in terms of character development. However, many of the secondary characters (like Sally’s parents or her work colleagues) get little fleshing out. An exception to this is the character of Nigel whose character does get explored a tiny bit in the form of his emotions. Catherine Shepherd does an exceptional job playing Sally as she explores what would make her happy for potentially the first time in her life. Likewise, Alex Macqueen does a great job playing David, a character who is clingy and has no filter. This shows his tremendous range when put in comparison to his roles in ‘The Inbetweeners’ and ‘The Thick of It’.

Sally4Ever is beautifully filmed with varying camera angles, which is refreshing to witness in a time where most comedies released today stick to a single camera set up. The use of music is brilliant as it is not overpowering and is used to compliment the scenes. A good example of this is the use of David Gray’s Babylon towards the beginning of episode one that is not only not overpowering but it livens up a scene that may have otherwise fallen flat.

Definitely worth a watch if you are a fan of dry comedies with many twists.

SALLY4EVER, Season 1, episodes 1 and 2. Premiering from Tuesday, February 5 at 7.30pm on FOX SHOWCASE.