BILLBOARDS oscars18 Sam Rockwell three billboards outside ebbing missouri by Caroline Russo | on March 5, 2018 | 0 comments | in Entertainment | Like it 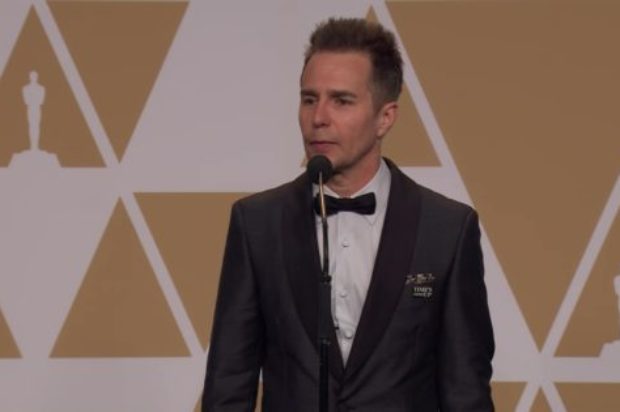 Q. Question from Bulgaria. Could you tell us more about the process? How you embodied the character? How you started working on that role?
A. Oh, it’s so boring, but if you want to hear it, I can tell you the whole ‑‑ you know, it’s like a big soufflé or a stew. You throw in some potatoes and some carrots in there and you work with an amazing dialect coach like Liz Himelstein who worked with Gary Oldman and Margot and Terry Knickerbocker, my acting coach. And I did some ride‑alongs with some cops, Josh McMullin in Southern Missouri. Liz Himelstein taped two cops, actually. There was a guy named Demer (phonetic) in L.A. I did a ride‑along with him. And I met with this skin graft doctor who introduced me to some burn victims, actually. I mean, but the thing is, that’s if you have luxury ‑‑ the luxury of time, you know, which you don’t always have for a part. And then I worked with Martin and ‑‑ but sometimes you get a part and you only have a week or a couple days to prepare. I heard that Jeremy Renner only had four days to prepare to play Jeffrey Dahmer, which is a lot, if you are playing Jeffrey Dahmer, you know. So I had the advantage that I had, like, two or three months. And so I got to indulge in all this research. And so it was a lot of fun. So that’s the long answer to your short question.

Q. You said a wonderful thing about the arc of your character being Barney Fife going into Travis Bickle.
A. Yes, yes.

Q. I’d love to ask, in any way, was Barney Fife and the great Don Knotts any inspiration to you as an actor throughout your career?
A. Absolutely. I mean that when I say Barney Fife and, you know, the town of Ebbing is very much like Mayberry, and Woody Harrelson’s character is very much like the Andy Griffith character. And, in fact, I could be wrong about this, check your facts, but I think we shot in Sylva, North Carolina and I think Mayberry was shot there, but I could be wrong about that. But, you know, the goofiness of Barney Fife, the kind of hapless thing of Barney Fife, and then his transition into somebody else was just sort of ‑‑ Travis Bickle was kind of a ‑‑ Barney Fife to Travis Bickle was kind of a generalization, but it’s a lot more complicated than that, obviously, but, you know, yeah.

Q. You dedicated your win to Phil Hoffman and I would just like ‑‑
A. Oh, you caught that, good.

Q. We could hear that.
A. You heard that?

Q. Yes.
A. Because I thought the music was going. Oh, good. I’m glad you heard that.

Q. So I’m curious, as a friend and as a colleague, tell me, you know, what he meant to you, how he inspired you.
A. Well, I guess you want to start making me cry, but he’s, yeah, he was an old friend of mine, and he directed me in a play at the Public Theater and, yeah, he was very close to me and he was an inspiration to all of my peers. You know, people like Jeffrey Wright, Billy Crudup, Liev Schreiber, you know, you know, everybody. Mark Ruffalo, Josh Brolin. I mean, whoever was in my age range, Phil Hoffman was the guy. And he was a great director and he believed in doing theater. In fact, he was ‑‑ he vowed to do a play a year, which I don’t know if he got to do because he was very busy doing movies, but he was a great inspiration and a great theater director. And I don’t know if anybody knows, he was a bit of a jock. He was a wrestler, and he played basketball, and he inspired me. And I could go on for an hour about Phil Hoffman. Philip Seymour Hoffman was a good friend and he was a huge, huge inspiration on me. Yeah.

Q. You know, I’m still counting, at 21, the awards that you won before the Academy Awards. So did you count them at all?
A. I’m sorry. Could you say it one more time?

Q. I stopped counting at 21 the awards that you won. So do you count them at all and do you feel that those were like billboards saying, Sam, you’re going to win the Oscars now?
A. No, but that sounds like a really cool dream, but no, no.

Q. Thank you very much. Obviously very proud of Martin because we hail from Ireland.
A. Saoirse?

Q. And Saoirse as well. [Indiscernible.]
A. Colin in IN BRUGES.

Q. Loads, exactly. As a frequent collaborator of Martin, what is it about him that makes him such a great artist?
A. Well, you know, he says ‑‑ Martin says that, you know, you couldn’t set this in Ireland or England, but I actually think you could set this movie in almost any working class town all over the world, but he disagrees with that, but I think you could ‑‑ it could be anywhere almost. But there’s obviously something very timely about it now, what’s going on in this country, you know. Yeah.

Q. There’s been some complaint, criticism about the film.
A. Yes.

Q. Specifically as it relates to path of a betrayal and the relationships with African Americans.
A. Yes.

Q. Can you talk about, specifically, your character and whether you take that criticism on or was that how you dealt with it and your sense of that?
A. Well, yeah. I mean, it’s a complicated issue, but, I mean, Kareem Abdul‑Jabbar wrote an article that was really amazing sort of defending the movie as far as that goes and it was really eloquent. I didn’t realize he’s like a cultural professor, which I didn’t know, in addition to being like a basketball icon, and that was a great article that articulated everything. And I think for me, you know, the whole thing is that, you know, they have a lot of work to do, Mildred and Dixon. It’s not like they are like all of a sudden redeemed at the end of the movie. They have, you know, a lot of work to do and maybe some therapy, you know. It’s an ongoing thing, you know. So, and it’s also ‑‑ it’s a movie and it’s a dark fairytale of some sorts. And so it’s like, it’s not necessarily ‑‑ in real life we probably would have gone to prison, both of our characters, so, you know. That’s ‑‑ that’s sort of how I see it.

Q. Thank you so much and congratulations.
A. Thanks. Thanks a lot. Thank you.