All Seasons Online Distribution Seinfeld Sony Pictures Home Entertainment by Caroline Russo | on November 14, 2017 | 0 comments | in TV | Like it Starring the multiple award-winning quartet of Jerry Seinfeld, Julia Louis-Dreyfus, Michael Richards and Jason Alexander, Seinfeld: The Complete Series is now available to download and own on digital today, for the first time ever from Sony Pictures Home Entertainment. 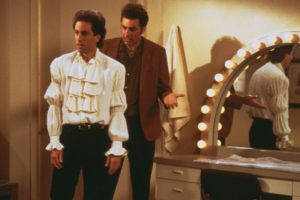 Fans now have an all-access pass to all 180 episodes across the series’ nine seasons and have the option to purchase individual episodes, full seasons or the entire series. From classic episodes like “The Soup Nazi,” “The Bubble Boy,” and “The Muffin Tops,” to historic moments such as Jerry’s Today show appearance in the infamous Puffy Shirt and George’s scenes with Yankees owner George Steinbrenner to the emergence of iconic catch phrases like “Yada Yada Yada,” “Double-dipping,” “No soup for you!” and “Shrinkage,” fans can finally complete their digital collection with all things Seinfeld.