SHANE JACOBSON IS AN ODDBALL 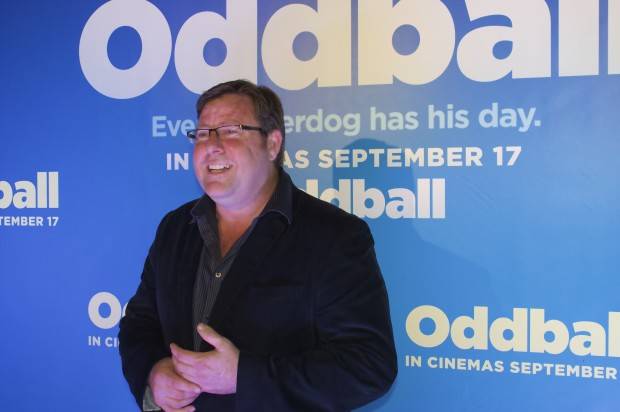 “Could it be any more Australian than that?” actor Shane Jacobson says with a big chuckle, “his name’s Swampy Marsh for god’s sake!” One of nicest guys in the biz, Shane Jacobson, stars as Swampy Marsh in the new Australian film Oddball. The film is based on a true story and follows Swampy (the town chicken farmer) and his family, along with dog Oddball, as they fight to keep Middle Island a place of conservation for fairy penguins in Warnambool. Swampy and his granddaughter Livvy (played by the adorable Coco Jack Gillies) discover that Oddball (a Maremma dog) can protect the fairy penguins on Middle Island from foxes.

The blue carpet was laid out for Shane Jacobson inside SeaWorld on the Gold Coast at the fairy penguin enclosure and before watching the film guests were treated to a show. They learned more about the creatures the film is about and even got to see two of the stars: Edith and Chip. After filming, co-stars Edith and Chip fell in love and have now successfully laid and hatched a new baby penguin at SeaWorld.

“(I) definitely got to meet Swampy before it and got the chance to work with Kai the dog before filming. They’re both oddball characters that are warming to the heart and have bubbly personalities and as a result, I think the movie will show whether I enjoyed getting to meet them. I think we know the answer,” Jacobson says with another big laugh.

They say you should never work with children or animals but I think it is safe to say that Oddball is the exception. Shane had nothing but praise for his canine friends and why it is great to have them in film. “Australia really does connect with animal stories and this film obviously involves a dog. Australians can really connect. Red Dog, I think, proves that. And I think as Australians we connect so much with movies that have a dog because this country has had dogs working on the land with man for so long, that’s how this country has survived you know, with them rounding up sheep. And that’s why this movie is great. I can’t think of another story like it.” 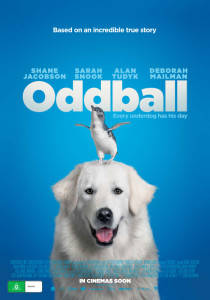 “I have a golden retriever. That’s where I got all of the hair!” Jacobson jokes, “in the film I have a lot of hair on my face and it’s pretty much all off the floor of our house from the dog!”

Swampy Marsh is a chicken farmer and Jacobson grew out a scruffy beard and permed his hair just for the role. “I had to get a perm and I had to grow it out, and I had a friend who saw it and said ‘please tell me you’re preparing for a role’ and when I said yes he said ‘thank goodness because otherwise you’ve made a poor fashion choice’,” he laughs.

When asked why people should go and watch Oddball Jacobson has nothing but positives to say about the film. “I promise from the bottom of my heart if you’ve got children, if you’ve got grandchildren, take them to the theatre and sit down together. You’re in for a great treat. And it’s a true story! After the credits have rolled this is still happening in Australia, it’s the conservation practice of penguins all around the world, so what a great way to celebrate it.

“And there’s a snippet of information we’ve been able to give you: right behind you there’s two of the stars of the film (Edith and Chip) that are now mating and are together and have had young. So the movie about saving penguins has, in fact, created another penguin. That’s pretty rare. I don’t think they can say that about Fury Road,” he finishes with another loud chuckle.

Oddball is a great family film that will even pull at the adult’s heartstrings. The incredible Australian cast includes the likes of Debra Mailman, Frank Woodley, and Sarah Snook. Take the kids along these school holidays for some good family fun.

To learn more about the Maremma Project on Middle Island go to http://www.flagstaffhill.com/education-resources/Middle-Island-Project/

Words and photos by Holly Licuanan