Feeling more like a true successor to ‘Casino Royale’ than the disappointing ‘Quantum of Solace’ does, ‘Skyfall’ may very well be not just one of the finest James Bond instalments yet but one of the best action films we’ve come to see grace our screens in quite some years.  Despite being 23 films down and in its 50th year of the 007 lifespan ‘Skyfall’ feels remarkably fresh, thanks in large part to its thorough modernisation of the character played once again by Daniel Craig.  There are sly nods to some of the previous Bond films peppered throughout but the new generation 007 is one that is easily the most accessible. 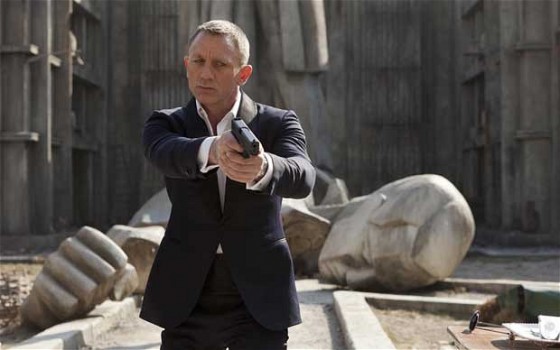 Wisely underplaying the action card, director Sam Mendes and screenwriters Neal Purvis, Robert Wade & John Logan opt for wisely timed action sequences rather than constant back-to-back spectacles which appear nothing more than empty when held loosely together by a non-sensical plot.  Here there is precision in the timing of when to deliver the next big bang and, as to be expected, the plot is intricate and intriguing enough to keep you sustained until they are delivered.  The first action sequence on offer, and it is perhaps the films biggest, is the pre-credit opener set in Turkey where Bond is on the hunt for a stolen computer hard drive that contains the identities of all undercover agents working in terrorist organisations.  What begins as a motorcycle chase (recalling the rooftop pursuit from ‘Casino Royale’) graduates to a slick hand-to-hand combat scene aboard the roof of a moving train and unexpectedly ends when Bond is unintentionally caught in the crossfire of the trigger finger of his partner Eve (Naomie Harris).  Brought out of ‘retirement’ Bond has to re-introduce himself to the world of espionage when he is called upon to uncover who is targeting the MI6 organisation and its covert agents.  This particular aspect of the film is probably the first time in the series’ history where we truly see the human side to Bond, and just how physically and emotionally damaging this lifestyle is.  If ‘Casino Royale’ was rebooting the character then ‘Skyfall’ is the closing chapter in Bond’s origin story.

During the rigorous re-training Bond undergoes, we’re introduced to Q (Ben Whishaw), the quartermaster for MI6 or gadget man for Bond as we all have known him to be, who this time around is presented as a young, skinny, IT graduate-type.  The picture perfect definition of brains to Bond’s brawn, the character is also brought back down to reality with his supplies for Bond, even at one point referencing, and scoffing at, the exploding pen that made an appearance in ‘Goldeneye’.

By this point in the film, roughly the 60 minute mark, we’ve enjoyed the action, a change of scenery (a lavishly designed locale in China) and been introduced to Bond girl material Severine (Berenice Marlohe), who manages to convey such heartbreak on the back of her tragic past with so much as a simple look and gesture, but still no villain; We know they exist, and evidently have a connection with Bond’s commanding officer M (Judi Dench), but just who are they?  When the moment finally arrives for their unveiling, it’s undoubtedly one of the strongest and most striking affairs in Bond history.  As Silva, Javier Bardem is nothing short of brilliant, and I honestly believe there is a real chance for some Oscar nomination goodness for this man as his portrayal is easily on par with his work in ‘No Country For Old Men’.  After his lengthy introduction speech, complete with a static long shot that stays on him until he gradually gets closer to us, the unnerving playfulness Bardem brings to the character is exhilarating to watch, especially when the ambiguity of his sexuality is brought about thus allowing an even more stimulating view on Bond than we had before.

As great as Bardem is though, nothing can be taken away from the man himself and Daniel Craig excels in every way as Bond.  He’s truly embraced this character and the grittier, more accessible way he has portrayed him will assure him a place as one of the favourite incarnations. The particular lack of a ‘Bond girl’ may perhaps be one of ‘Skyfall’s letdowns, Harris as Eve doesn’t get nearly as much screen time as she deserves and Marlohe, gorgeous as she is, ends up being pretty window treatment as opposed to full dressing, but the silver lining to this is that it gives Dench as M her chance to truly shine, emerging as the real Bond girl for this outing.  Her backstory linking to Silva allows the brightest insight to her past yet and Dench, who rarely puts a foot wrong in any production she’s involved with, is simply marvellous in a role that could be classed as Bond’s true love.

Having survived 50 years so far (and if the character can make it through tripe like ‘Die Another Day’ then we’re in smooth sailing waters) there’s no doubt we have  another 50 years  with one of the more superior characters created in cinematic history.  And thankfully ‘Skyfall’s credits assure that ‘James Bond will return’.