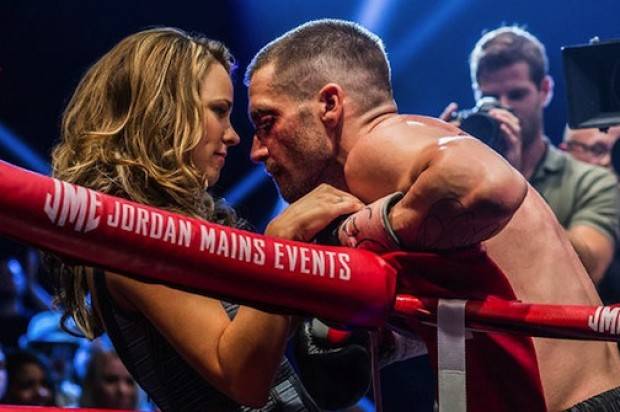 An absolute powerhouse of a film, one whose emotional heart is as strong as its various bloody fight sequences, ‘Southpaw’ works within the compounds of the classic underdog/boxing melodrama genre without overly succumbing to the notes we’d expect. Proving that his work with more dramatic tales is stronger than his forays into blockbuster action pieces, director Antoine Fuqua (‘Training Day’, ‘Olympus Has Fallen’) works confidently behind the camera for a film that is impressively stacked across the board – from the Eminem-heavy soundtrack to the script courtesy of ‘Sons of Anarchy’ scribe Kurt Sutter – with the transformative performance from Jake Gyllenhaal being the film’s ace up its sleeve.

Much has been made about Gyllenhaal’s shredded physique, and indeed it’s hard not to notice just how ripped he got for the role, but there’s more to his performance than the obvious aesthetics with his tortured face (quite often dripping with blood) inviting us to connect with the rage-filled fighter we consistently watch be pummelled like a punching bag. As the film opens on Gyllenhaal’s Billy Hope as his hands are carefully bound prior to a championship fight at Madison Square Garden, it doesn’t take long for us to realise the emotional and physical chore this profession is bestowing on Billy and his loving wife Maureen (Rachel McAdams); a simple text she sends to their daughter (Oona Laurence) stating “Daddy won” presents us with a feeling of relief more than excitement. Initially focusing on Billy and Maureen’s loving relationship, she is clearly the brains behind his career, the film takes a dramatic turn when a stray bullet drastically alters the course of Billy’s life following a violent altercation at a charity event which tragically claims Maureen’s life. Emotions run raw, and the fact that his daughter is taken away from him and placed in child services only adds to his grief.

From here ‘Southpaw’ aims to eventually elate its viewers by focusing on the relationship between Billy and his daughter, as well as his own rise from the ashes when he goes to work for, and train with, Tick Willis (Forest Whitaker), a coach with a tough-love approach who has an odd adversity to pro-boxers, alcohol and foul language; though he makes exceptions for all these when working with Billy. As his relationship with Tick builds, his connection with his daughter sadly deteriorates and it’s in these more subtle moments that we are once again privy to the phenomenal performer Gyllenhaal is. Whitaker once again proves what a joyous screen presence he possesses, McAdams perfectly blends a sense of toughness and vulnerability, and the surprising addition of Curtis “50 Cent” Jackson showcases what the rapper is capable of when he is invested in his work. The actor that walks away with the film though is young Laurence, delivering a naturalistic performance void of any overt-cuteness; the scene where she breaks down and begins to hit Gyllenhaal in a rage is one of ‘Southpaw’s most affecting moments.

Though it’s easy to criticise the film on its “Hollywood”-like ending, especially after a relatively gritty first half, it doesn’t make it any less engrossing. It may not be poised for classic status ala ‘Raging Bull’ but ‘Southpaw’ still delivers as one of the year’s best dramas, and an absolute highlight in the careers of Fuqua and Gyllenhaal.