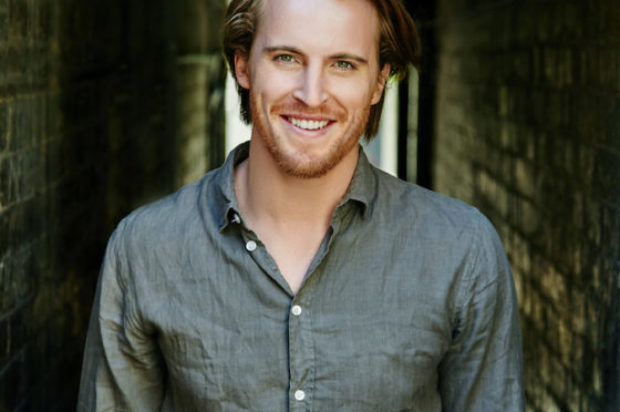 The Hush Hush Biz spotlight is on one very talented and busy Brisbane actor and now producer Thomas Larkin. Over the years Thomas has been making a name for himself in the theatre circles and has performed in some of the most outstanding stage production with leading theatre companies which include Queensland Theatre Company including Macbeth (Malcolm), Romeo and Juliet (Romeo), Treasure Island (Jim Hawkins) in a national touring co-production with Matrix Theatre Company and in a Queensland tour of The Lost Property Rules. Thomas has also performed with La Boîte Theatre Company in As You Like It (Orlando), Julius Caesar (Mark Antony), Hamlet (Horatio) and The Wizard of Oz (Scarecrow), a co-production with The Danger Ensemble for the Brisbane Festival.
At present he is currently with Queensland Theatre Company with “The Wider Earth”and then to follow up on his next production “True West” where he is also producer for second time.

1. Where were you born and raised?

I am a Brisbane boy. I went to Terrace (St Joseph’s College) and then studied at TAFE Brisbane before moving to Melbourne to complete a Bachelor of Fine Arts in Acting at the Victorian College of Arts (VCA).
2. How long have you been an actor now and how did you get drawn to it?

I have been lucky enough to be in professional employment as an actor since 2010 soon after completing my studies, so I have been working now for nearly 7 years in Brisbane, Melbourne and touring productions that have taken me across the country. I initially enrolled in a Bachelor of Human Movement at the University of Queensland and while I enjoyed this, I knew it wasn’t quite the right fit. After seeing an article about the TAFE Performing Arts course I became intrigued and commenced that. After a short time there I knew that I wanted to pursue this further and I was lucky enough to get into VCA.
3. What was one of the first productions you performed in?
David Berthold cast me in my first professional role in Brisbane in 2010 upon his commencement as Artistic Director at La Boite. I was Horatio in Hamlet, which is still one of my favourite shows to have worked on.

4. Having been part of many productions with Queensland’s leading theatre professionals, are there any aspects that you first look to when you prepare for the role?

The key for me is to be as secure in my lines as possible so I have freedom to really connect with the other actors on the floor, although this can’t always be the case, especially when you are working on a new script which may be changing as the rehearsal process unfolds or in some cases, the work might be collaborative and totally devised with no script at the onset. This is also an exciting process. Keeping fit, healthy and feeling really present is important so that you can make the most of the often very short rehearsal process.

5. You are now wearing a producer’s hat and had great success with Sex With Strangers with two sell out seasons. What was that experience like given you also performed in the show? Producing has certainly been a steep learning curve and a challenge, but it has allowed me to continue to take my career in the direction I desire. It is very empowering taking back even just the tiniest morsel of control in an industry like acting where it all feels up in the air and out of your hands much of the time. 6. Your second production as both producer and actor is in progress with True West opening next month. Can you tell us a bit about how this came about?

Late last year the Brisbane Powerhouse approached both Troy Armstrong (my fellow Co-Producer from Sex With Strangers) and me to gauge our interest in putting on another production in 2016 with a similar energy to Sex With Strangers. After a number of conversations we pitched Sam Shepard’s True West. They jumped at the concept and we quickly secured the rights to lock it in. I have been a fan of Shepard’s work for a very long time and have seen excerpts of this particular play performed but never had the chance to sink my teeth into it as an actor myself. It has been a long time since Brisbane has had a story like this on stage, or staged any of Shepard’s work.
7. What other roles would you love to do in the future in theatre or produce? I think my ultimate dream would be to bring a character to life onstage or on the screen which has not been seen before – to have the artistic freedom to create a role in a new work which may become a classic and be reinvented and re-staged for many years to come. I think that knowing that you set the benchmark or paved the way for actors in years to come would be exhilarating. As far as existing roles, I have always wanted to take on Petruchio in Shakespeare’s Taming of the Shrew or Stanley Kowalski in Tennessee Williams’ A Streetcar Named Desire. There is something appealing about being gifted the opportunity to take on any iconic role in theatre or film history.
8. What do enjoy doing most when you’re not working?

I am a very physical person so I definitely enjoy exercising. Bikram Yoga and boxing are my current favourites. I also like to ensure I get a dose of sunshine and the outdoors, and I am always on the hunt for great coffee.
9. If you were to invite some famous people to dinner who would they be?

10. If you had 3 wishes that had to be used to improve the world what would you wish for?