In 1994, David Lake did what no other storyteller ever had – he moved the traditional two-dimensional book narrative into a multi-sensory package involving a story, music and boundless imagination. The original publication of ‘Tears of Glass’ contained a fourteen-track cassette tape, containing original songs that played out in tandem with the story itself.

It’s 2015, and about time Lake turned his now-timeless masterpiece in an eBook.

This new digital version, recently released on Amazon, wraps the experience up into a fully-automated adventure. But don’t worry, it’s all original content and is equally as engrossing as it was twenty-one years ago. Oh yes, and the book also hints toward a nuclear disaster that the UK is quite literally sitting on!

A Child of the Sixties, desperately holding on to the dreams of that generation… the girl whole stole his heart and the songwriter who touched his soul. These three are drawn together as they become reluctant fugitives… but from whom? The deaths of his friends, the gay cell of the CIA, twenty two British Scientists meeting with fatal accidents… The Royal Family’s own Secret Service a schizophrenic cockney knight and whole countries being run by organised crime… This jigsaw eventually forms a frightening picture… but have the pieces been put together correctly?

This contemporary thriller is integrated with 14 songs – necessary to the full appreciation of the novel. The songs drive the narrative. or is it the other way around?

“Back in 1994, I did something that had never been even dreamed of before,” explains Lake. “We had many problems getting our initial audience – including a publisher that backed out right after WH Smith placed a big order. However, it somehow became a huge success and we sold thousands of copies.”

Continuing, “It’s now back in digital form, with all of the original words and music – including compositions by Paul Millns. I’ll leave readers to figure out how much the music and plot feed and feed off each other; it’s a hugely immersive experience they’ll never forget – wrapped up into a chilling story of nuclear war that could easily become true.”

The media and critics agree, leaving rave reviews for the book’s original edition.

BBC’s ‘The Slate’ commented, “A wonderful, scintillating package, in which words and music, speak to the heart and mind about the importance of truth and of love and of honesty.”

A radio station adds, “Moves along quickly, a real page turner. A cross between Dr Strangelove and Easy Rider; The central character, Morgan, is a delight. A smoking, drinking, womanising moron- but inside he’s hiding a philosophical, even heroic nature. Can’t help liking him, but would never admit to it; It screams MOVIE!”

‘Tears of Glass’ is published on 17th June. For more information, visit the official website: http://tearsofglass.co.uk. 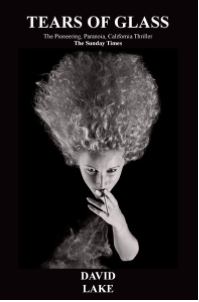 David Lake is a pen-name. He was born in Wales and lives near London with his family, but has spent time in the United States and Europe.

Lake’s incarnations include Scientific Research and the Record Industry.

He was the Marketing Manager for Virgin Records in the 70’s as well as running his own label. He was responsible for persuading the C of E to allow the first [and last!] rock group to perform in their Cathedrals [Coventry, Liverpool and York Minster]. He promoted these Tangerine Dream concerts and BBC2 broadcasted Tony Palmer’s film of the Coventry Cathedral concert. He also promoted Vangelis at the Albert Hall.

Lake also owned and managed a number of ‘Rock’ clubs in the 70’s.