Events Food and wine Spago Hollywood Wolfgang Puck by Caroline Russo | on November 18, 2020 | 2 comments | in Entertainment | Like it 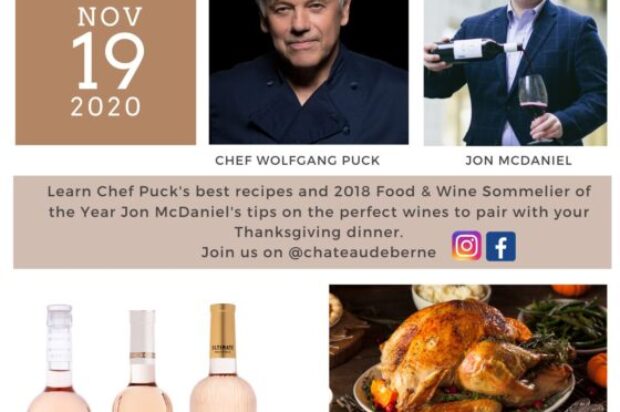 “A Perfect Pairing,” will premiere virtually worldwide at 4:30 PM PST/7:30 PM EST on online platforms, including Château de Berne’s website and Facebook, and others, and will be available post premiere to watch throughout the holiday season.

“We are honored to be working with the world’s most celebrated chef Wolfgang Puck, and rising sommelier star Jon McDaniel, to present ‘A Perfect Pairing,’” comments Gaudreau. “We feel it truly is a perfect pairing on all levels, Chef Puck and Jon with excellence in food and wine.”

Winner of Food & Wine Magazine’s Sommelier of the Year in 2018, Wine Enthusiast “40 Under 40 Tastemakers” in 2017 and Riedel Crystal International Sommelier of the Month in November of 2016, he was recently named the United States Academy Chair for “World’s Best Vineyards”. Jon has been featured in Wine Spectator, Wine & Spirits Magazine, Forbes and World of Fine Wine Magazine. In 2016 and 2017, five of World of Fine Wine Magazine’s Top 100 Wine Lists in the World were under McDaniel’s direction.

In 2015, he was knighted into the Order of Snodar in Valpolicella, Italy and knighted into the Ordine dei Cavalieri del Tartufo e dei Vini d’Alba in 2019. He is an Adjunct Professor of hospitality management at Roosevelt University in Chicago, a Hospitality Fellowship Chair at The University of Texas at Austin and the owner and winemaker of Amos Cellars, a critically acclaimed Sonoma County wine brand.