book reviews books In The Beast’s Garden Kate Forsyth Kylie Thompson by Caroline Russo | on August 31, 2015 | 0 comments | in Book Reviews | Like it When Hitler begins his physical attack on the Jewish population of Germany, the impact reverberates painfully through Ava’s world. Though her family isn’t Jewish, her best friend, Rupert, is. On the Night of Broken Glass, Ava runs to help Rupert and his family escape the rioters and stormtroopers. When she arrives to see Rupert’s family home being attacked, the officer she finds herself speaking to might be her friend’s only chance of survival.

Leo is intrigued by the beautiful girl brave enough to throw herself into the streets in the middle of a riot. The pair barely speak, and yet her words force him to question his ideas of duty and honour, and his role in the coming war.

When Rupert is forcibly taken from her home, and sentenced to work or die in Buchenwald prison camp, Ava is determined to resist the new regime. But when Ava’s attempts to warn others of the coming dangers sees her father jailed and badly beaten, and with new policies looming that would see her beautiful niece deemed worthless and taken away, Ava will do anything to save her family. Even if it means joining forces with the man who may have been responsible for Rupert’s arrest.

In The Beast’s Garden, Kate Forsyth has masterfully reimagined the Grimm Brother’s story ‘The Singing, Springing Lark’, better known by its alternate retelling as ‘Beauty and the Beast’.

The beauty of Ava’s increasingly less privileged world is contrasted ruthlessly with the realities of war, and Rupert’s life in a concentration camp. And yet, even in the worst moments, there is always the beauty of hope and bravery to counter the horror. On the surface, The Beast’s Garden is a love story, but beyond that, it’s a story about extraordinary acts of bravery by everyday people. Rupert doesn’t have to defy orders to help protect Jewish children in the camp, and yet he does. The German officers, and German civilians, don’t need to rebel against Hitler’s rule, and yet they find a range of ingeniously bold and subtle ways to do so.

There were moments that could have been more fully explored, and a few moments of abruptness that seemed out of place in the overall flow of the story. Most of these issues arise because Forsyth is telling real stories interwoven with her fiction work, and changing the fate of those who died resisting the Nazis would be dishonest and disrespectful to their memories. Aside from the main characters and their families, the majority of stories and important figures in the story are real.

It you’re looking for the stereotypical beastly qualities from Leo, you might be disappointed. Leo starts the story less a beast than a jerk, and someone raised to believe that loyalty and honour demand blind obedience to whoever happens to hold power. There are moments of nastiness from Leo that only exist because he’s believed gossip rather than figured things out for himself. The problem, of course, is that this apparent inability to discern truth from stereotypes and gossip would hardly serve his career prospects as an intelligence officer, let alone make him so vital a part in the plans to assassinate Hitler. It’s a difficult task Forsyth has given herself, as a story about the allure of a beautiful woman overcoming a Nazi’s genuinely cruel nature would have trivialised the story being told, not to mention the historical legacy of the times. But even if Leo starts the story more naïve than I’d have anticipated, I can’t find it in myself to call it a failing in Forsyth’s writing, so much as a story of a young man forced to grow up quickly under the looming threat of war.

What I love most about this story is its female protagonists. Ava is strong willed and intelligent, willing to risk it all to protect those she cares about. But it was Jutta that I found myself captivated by. Jutta is Rupert’s younger sister, and throughout the story she is both a pillar of strength to those around her, and the one most willing to risk herself for the greater good. When she realises that she is expected to give up her cultural heritage while still accepting punishment for being Jewish, she decides to fight back by better honouring her culture. Brave enough to refuse safe passage from Berlin without her parents, and cunning enough to keep her head when everyone around her is a potential threat, Jutta brings a savage sort of heroism to the fore in a story rife with the excessive luxuries given to ranking members of the Nazi party.

The characters, historical or fictional, are remarkable in their realism, whether it’s Monkia’s casual cruelty, or the Admiral’s growing desperation to solve the Hitler problem. If you like immaculately researched historical fiction, then consider The Beast’s Garden is a must read for 2015.

The Beast’s Garden is available through Kindle and iTunes, or at your local bookstore. 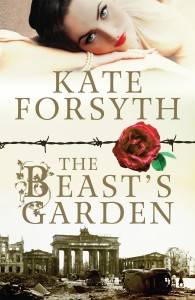 Genre: historical fiction/romance and the reimagining of fairy tales.